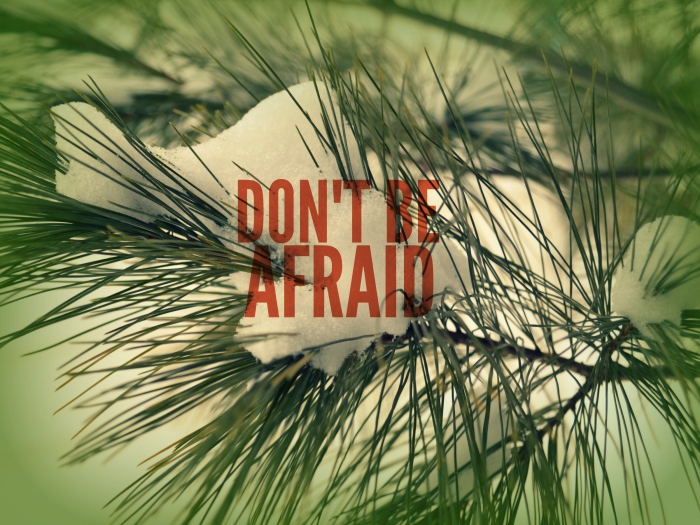 On that day the announcement to Jerusalem will be, “Cheer up, Zion! Don’t be afraid! For the Lord your God is living among you. He is a mighty savior. He will take delight in you with gladness. With his love, he will calm all your fears. He will rejoice over you with joyful songs.”

Relate: There was not a war in history that revolutionized both warfare in general and society as a whole more than The Great War. We now call it World War I and it seems to take a backseat in the popular mindset to WWII, but the latter war, although bloodier, was only an aftershock culturally to the way WWI effected the geopolitical landscape and cultural mindset the world over. Many historians say that after an entire century, we are still trying to adjust to the changes that war brought about.

Can you imagine what it must have been like for those on the front lines, or trenches, of that change? Can you imagine those who had been recruited to join the “glory and dignity” of being a soldier as they huddled in their trench inadequately prepared for the winter’s cold. There is a never ending rumble of thunder as the fusillade of artillery is unceasing. Every shift in the wind has men grabbing for their gas masks in fear that the enemy, or their own troops further down the line, might have struck again. Desperately, these men pray that their officers won’t order another charge since the last one obliterated thirty percent of their squad… again.

Then, during a lull in the bombing, a sound is heard. Up and down the British lines, talking stops as the singing becomes louder and more uniform. The “enemy” is singing Stille Nacht. When the song winds down, a few Brits further down the line begin echoing the chorus in English. “Silent Night. Holy night. All is calm, all is bright…” When the song winds down, the Germans start up another one. Those with binoculars begin noticing that the German trenches are all lit with candles. Soon, makeshift candles are being put up in our lines too. A few foolhardy men begin to venture into the no man’s land that, any other day of the year, would mean certain death. But some Germans are creeping out of their trenches too. Soon the trenches of both sides are pretty much cleared out as both sides join in the middle. For one night and one day, Christmas Day, all fear is put aside. A British soldier is offering free haircuts to the Boche. Two Lieutenants are exchanging souvenirs. You can even hear the cheers of an impromptu football (soccer) game that has broken out. Wherever you look, for at least a brief moment, humanity is restored. This is what Christmas is about.

React: The prophet Zephaniah wrote, “Cheer up, Zion? Don’t be afraid! For the Lord Your God is living you. He is a mighty Savior.” The after the angel told Joseph not to be afraid to marry Mary, he quoted Isaiah: “She will give birth to a son, and they will call him Immanuel, which means ‘God is with us.’ ” The first thing Gabriel said to Zechariah and Mary when telling them of the pending births of John and Jesus was, “Don’t be afraid.” Once he was able to speak again, Zechariah’s response was: “Praise the Lord, the God of Israel, because he has visited and redeemed his people. He has sent us a mighty Savior…” When Mary heard what the angel said, her response was, “Oh, how my soul praises the Lord. How my spirit rejoices in God my Savior… He has helped his servant Israel and remembered to be merciful.” I like how John says it best, “The Word became flesh and dwelt among us.” Literally, He tabernacled with us. He pitched His tent.

The presence of Jesus directly corresponds to the absence of fear. If Jesus is living dwelling among us, or in us, then fear has no place in our lives. That is because Jesus is the perfect embodiment of love and “perfect love drives out fear.” So, what are we afraid of? The answer doesn’t come in more guns (or more gun laws). It isn’t found in stricter border controls. On a more personal level, we won’t get rid of fear by being more prepared or controlled. Self defense classes and a can of mace in our pocketbooks, while not necessarily harmful, are not the answer. The answer is love. The answer is Jesus. He came and pitched His tent with us. Have we done the same with Him?

God, help me to better realize that my only true enemies are Satan and sin. Even though the world might want to demonize certain groups of people, You love them. Even though sometimes prejudice and fear try to dominate my mindset, You came and tabernacled among those who declared You their enemy. You came to live and to love the very people who would kill You. Help me to be more like You.

5 thoughts on “Don’t be Afraid”