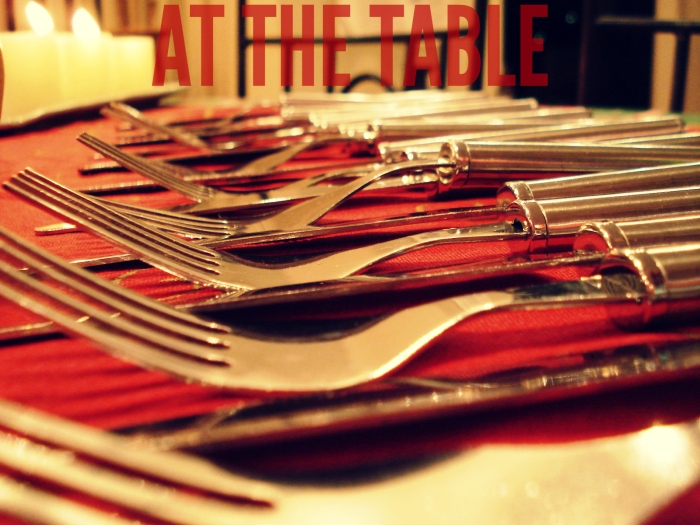 Your children will be like vigorous young olive trees as they sit around your table. That is the Lord’s blessing for those who fear him. (Psalm 128:3-4)

Relate: Twelve drummers drumming. That used to be my cup. Actually, on the earlier sets it was nine drummers drumming but that’s neither here nor there. Every year, for Christmas our family would set up a really nice dinner table with our “best China” except we had special Christmas glasses we would use. Of course, every year a few of them would break. A half dozen or more hyper kids running around trying to clean the kitchen so they can get into the living room and start opening their presents are not the most careful of dishwashers. So some years, I would be stuck with something else until enough broke we could justify getting a new set. But if it was available, I drank my egg nog, or apple cider, out of twelve (9) drummers drumming. If somebody tried taking it… body parts would start flying.

Christmas dinner was a special meal that almost rivaled Thanksgiving. Not only did it come with everybody pitching in and making something, but it consisted of lively conversations, bucket loads of enthusiasm and anticipation, and it would be topped off with a birthday cake for Jesus. (Yes, we all know Jesus wasn’t really born on December 25.)

React: Beyond Christmas, family meals were always a huge part of the great memories I have growing up. I enjoy and am content(ish) with the single life God has directed me down, but one thing I really do miss is the opportunity to pass such memories on to another generation. To be honest, as I see so many families stuffing their calendar with so many things that family meals become as rare as… Christmas, I just have to shake my head. Some of the greatest chances for character building happen around the table. Some of the best opportunities to teach your children the best you have to offer happen around the table.

Honestly, if our families aren’t even together enough to share a dinner at least a few times a week, are we really families? All too often I think parents have stopped being parents and instead are babysitters and financiers who are being spoiled in all the wrong things while being starved on the issues that really matter. There are sixteen days left before Christmas. Let’s see if we can’t make twelve of those days a little more Christmas by having a family meal at least a dozen times. Are any families out there up to the challenge?

God, I thank You for the legacy of a good and godly family. I thank You even more that I have been adopted into Your family. I know that one day, there will be a dinner feast that can only be described as heavenly. Until that time, help me to bring a little more of You to every table at which I sit. Help those in families to live more like a family and for those, like me, who have no family of their own, help us to bring the values of love and community to the meals we are intentional in sharing with others.

7 thoughts on “At The Table”