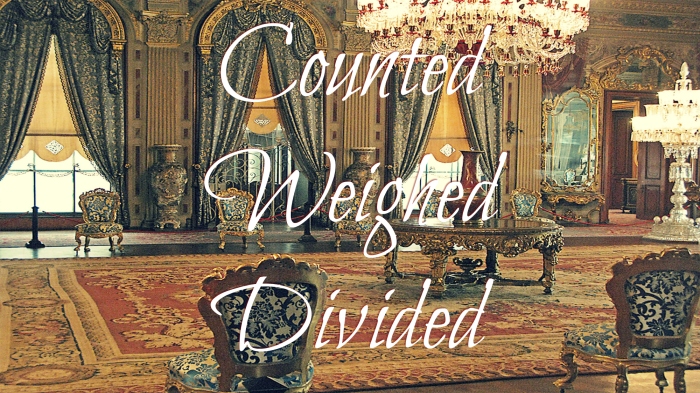 For you have proudly defied the Lord of heaven… You have not honored the God who gives you the breath of life and controls your destiny! (Daniel 5:23)

Relate: It was the party of the century. Everyone who was anyone was expected to attend. Shatha Hassoun was headlining the first night and Klodia Hanna the second but plenty of other musicians and celebrities would be there. In fact, nobody dared not attend. This was one of those “must attend” parties that could tank someone’s career if they failed to show up.

Of course it wasn’t just celebrities. Businessmen and politicians were also planning on being there in abundance. This wouldn’t only draw Iraqi businessmen. Every major oil company along with hundreds of others who had interests in the region both political and economic came. In fact, both the ambassador Stuart Jones and the CFO Alan Weisselberg were going to be there and both had received a personal call from Trump just hours before the event began. The young man who had only recently replaced Fuad Masam as president of Iraq was a young, new charismatic man whose rise to power can only be called meteoric. He had already demonstrated that he had the potential to be the premier leader in the Middle East both politically, culturally, and militarily. Religious Christian nutcases were all lining up to “prove” how he was the antichrist. For pretty much everyone else everywhere he was the man who all hoped could finally bring stability and peace throughout the region. Not only that, it looked like he was going to have a lot of fun doing it.

The party was only minutes old when it happened. The giant screen behind the stage where the band was playing lit up and every other light in the house went out. All conversation ceased and everyone’s attention turned to that screen. Those near the back could hear the tech guys in the booth frantically trying to figure out what was going on and how they could fix it. Obviously, they were not having any luck. On the screen in front, one by one, in a flowing script four words appeared:

As soon as the final “d” was written, behind that screen as if captured on a camera, the new Iraqi president appeared. Everyone in the room, and soon everyone watching any news channel everywhere in the world watched as he grabbed his left arm, collapsed to the ground, and died. In one single, unexplainable instant that party turned into a tragedy.

React: It is hard to imagine what it must have been like at Belshazzar’s party. It is easy for us to point our finger with the vision of hindsight and wonder how he could have partied while the enemy was at the gate (and sneaking through it). What if God had showed up at this past week’s Thanksgiving party that once again at midnight turned into an economic orgy of greed and idolatry? Was Balshazzar saying like we would have, “I had no idea this would happen.” What tragedies or disasters are right outside our door even as we blindly look the other way, feign ignorance and continue on with our godless lives? Nebuchadnezzar was given many years and multiple opportunities to see the power of God in action and turn from his ways. His grandson, the first time he appears on the scene. That was it. Show’s over.

If you are reading this, it is now your chance to turn and might be the only one you will ever get. We might not consider ourselves proud, but living our lives as though He does not exist is the height of arrogance. Throwing Him a weekend nod or a brief dinnertime thanks and then ignoring Him the remaining 95% of our week is pride and idolatry just as serious as that displayed by any ancient Iraqi kings. God forgive us for not acknowledging that everything we have, every breath we take and every beat of our heart happens only because You sustain us.

Dear God,
Forgive me for the many times and the countless ways I have read stories from Your Word and not considered how they might apply to me. Forgive me for not paying attention to the warning in my life they should have taught me. Forgive me for living and speaking and acting all too often without giving consideration to Your will in my life. This is extreme pride and I have no excuse for it. Help me to live a life surrendered so that when the day comes when my actions are counted and my thoughts weighed, I would not be separated from Your presence.
Amen