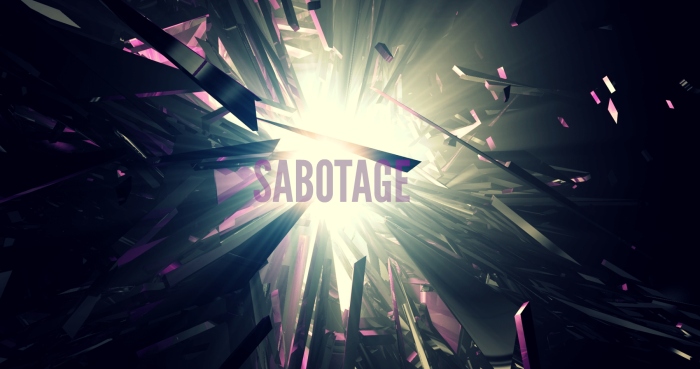 Let both grow together until the harvest. Then I will tell the harvesters to sort out the weeds, tie them into bundles, and burn them, and to put the wheat in the barn. (Matthew 13:30)

Relate: Right around the beginning of the nineteenth century, the industrial revolution started picking up steam (often literally) in England. Although this was beneficial for most of the country, many textile workers were finding themselves being replaced by newer and faster machines. Taking their cue from a possibly fictional character named Ned Ludd, these now unemployed workers organized as the “Luddites” and began smashing up looms and factories from Nottingham to Lancashire. Their sabotage became so common and disruptive that the British Parliament made it a capital crime to intentionally damage such machinery.

Perhaps the most famous example of sabotage would be the Black Tom explosion. Black Tom is an island named (with a complete absence of political correctness) after its first inhabitant. The island had a major rail bridge connecting it to Jersey City and during World War I it was used as a staging post for munitions while the US, though still technically neutral, geared up for war. A couple of the guards were apparently German agents and they started fires (bombs?) around midnight that soon led to consequences beyond their wildest imaginations. At the time there were about two million pounds of munitions on that island and at 2:08 AM it lit up with an explosion measuring a 5.5 on the richter scale. Glass was shattered in homes as far as 25 miles away (think Times Square). The Statue of Liberty had shrapnel embedded in its torch and skirt. Even as far away as Philadelphia people could feel the ground shaking.

While not nearly on that scale, what Jesus describes in Matthew 13 is an act of sabotage. A farmer works hard at preparing the ground and then planting his seed. Overnight an enemy goes out and plants weeds on the same ground. Of course this treachery isn’t discovered until the plants begin to sprout and by then it is too late. That far into the season the farmer couldn’t just dig it all up and start over. You would expect the workers to go out and pull up the weeds now, but doing so would kill off most of the legitimate plants and severely damage the harvest. This farmer is ruined. Or so it seems.

React: Satan is that saboteur. He comes to steal kill and destroy. God created this world and He declared it good. Then the enemy came in “overnight” and through lies and deception “planted” evil into the hearts of the pinnacle of God’s creation. If I were God (I know how blasphemous that statement sounds but bear with me), I would have wiped out evil right then and there whatever it took. Good thing God is smarter and more full of grace than I am. He knew that in order for good to continue to grow and thrive and continue, evil must also grow until the end. One day there will be a judgment and a separation but not yet.

There are times when I see evil around me and I wish that there was a way to just cut it right out. I hear multiple times daily a call going out for people to come and gather at false temples to pray to a false God. I see at one street corner after another the victims of a struggle between one evil group (ISIS) and another (Ashad) in a neighboring country (Syria). There is evil in our world and it is growing… but so is the good. Am I growing with it, or am I helping in its sabotage?

God, when I look around and see the evil that seems to be growing exponentially in the world around me a part of me just breaks inside. Help me to see that there is good growing apace. Help me to be a part of the good that is growing. I know that the enemy has sabotaged this world, but He did not destroy Your plan. You are still in control and one day there will be a reckoning. Until that day, let me be about Your Kingdom business.