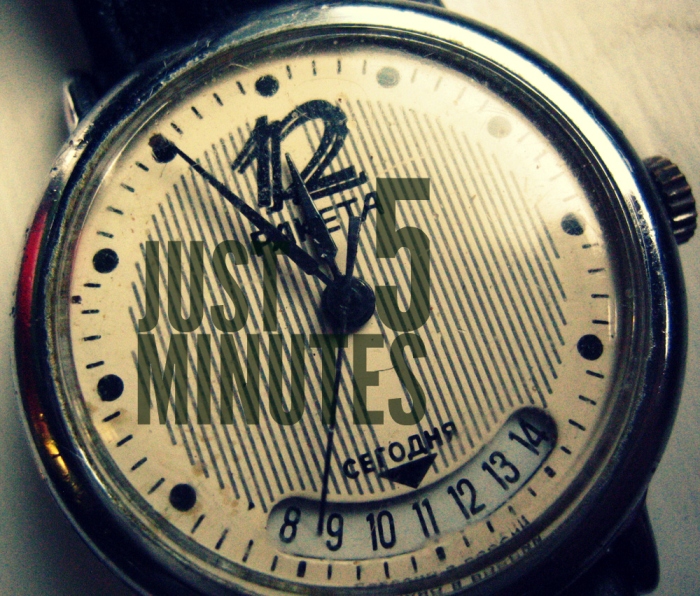 While Jesus was here on earth, he offered prayers and pleadings, with a loud cry and tears, to the one who could rescue him from death. And God heard his prayers because of his deep reverence for God. (Hebrews 5:7)

Relate: I think it was my junior year in high school when I heard a youth pastor challenge us at some rally to saturate ourselves with Jesus. I don’t remember exactly how he worded it but somehow a challenge was issued to read through the gospels, as quickly as possible, seven times. That rally was on a Friday night. By the time I left for school the following Monday I had done it.

Sometime during my day at school I began to write, “Just Five Minutes”. I wish I had kept a copy of it because I would love to read it through now, but the only writing I still have from that time are my journals. In reading the four gospels over and over again nonstop all weekend, the thing that really stuck out to me was how often Jesus went away to pray. Over and over again He was leaving the crowds behind, often He would leave most or all of His disciples behind as well, to get alone with the Father. Not only that, Jesus seemed to have to “work” for His times and places of prayer. He would go on long hikes, He would climb up mountains, or cross lakes to do it. Jesus took prayer very seriously.

React: The main thrust of “Just Five Minutes” was to contrast what He did with what we challenge people to do today. We encourage people to take “Just Five Minutes” to get away and get alone with God. Somehow we have fallen into the belief that if someone can faithfully do a five minute devotional every day they are doing well. The sad truth is, we encourage this because so many of us so called Christians have a hard time even doing that. Just five minutes is not enough. A five minute “Daily Bread” devotional is a starvation diet.

If I were to give God a tithe of my time, that would be two hours and twenty-four minutes every day. While I wouldn’t legalistically hold to that, something along those lines is far more spiritually realistic than an anemic five minute token chore we can check off our morning to do list. Jesus worked for His prayer. He fought hard for His time alone with the Father. He took such things very, very seriously. Do I?

God, I come before You now with nothing on my agenda other than to spend time in Your presence. Forgive me for those times when I have made communion with You a chore. Forgive me for the times when I have neglected to do even that. God, I long for more of You in my life. Help me to understand what things need to be cut out of my life that I might be able to devote the time to You that I should. Help me to reshuffle my priorities not just so that You are first, but so that You are the only pursuit of my life.