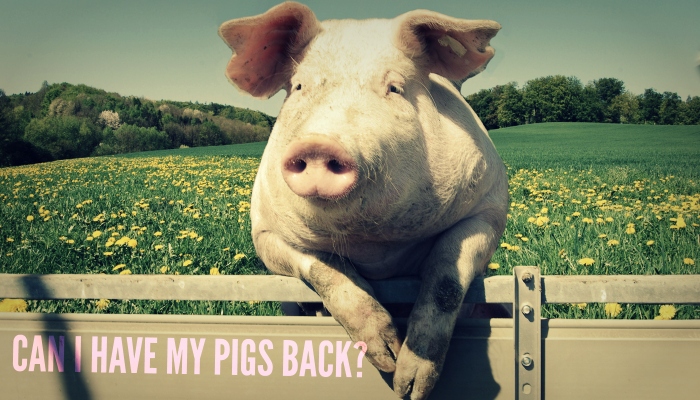 But Jesus said, “No, go home to your family, and tell them everything the Lord has done for you and how merciful he has been.” (Mark 5:19)

Relate: I have heard time and time again sermons, illustrations, and messages about the time Jesus cast the demons out and sent them into a herd of pigs. I have heard some amazing insights and I have heard some stuff that made me question the speaker’s sanity let alone their scholarship. There is one simple observation that I don’t think I have ever heard anyone else make, perhaps some have and I just missed it, but either way it seems too obvious to be so often overlooked… Either one individual in the community was awfully rich or this herd of pigs that just drowned was actually a community affair. In today’s market, a herd of  two thousand pigs is going to run between $300,000-$400,000. Can you imagine a four hundred thousand dollar investment and watching it run right off a cliff? If I owned my house and watched it, with everything inside it, including the car in the garage, go up in flames. Then I realized that I didn’t have any insurance on any of it… I’d probably start to have a little bit of an idea of what watching those pigs run off and drown themselves must be like. Lets keep that in mind when we get back to the rest of the story.

So the pigs are gone but nobody realizes it yet when crazy Joe comes waltzing into town. He’s dressed and… well, he doesn’t look so crazy anymore. There’s definitely a happy spring in his step as he walks right to the town square, a different kind of happy than when he used to be sitting around naked picking the legs of bugs with drool coming down the side of his mouth. This is a normal, sort of happy, like it’s his birthday and the party’s about to start or something. Everybody gathers around to watch what is about to happen. We all love a freak show and crazy Joe has been this town’s regular entertainment for years. Just so long as you don’t get too close. Joe has been known to pick the legs off more than just bugs. Anyways, with coming right into town… well, everybody loves a train wreck too and somebody’s gonna be having a real bad day real soon. I gather with the rest because I know I am faster than at least half the crowd. I don’t have to outrun Joe, I just have to outrun whichever out of shape fool becomes his victim. Crazy Joe looks around at the gathering crowd, smirks a freakishly normal, happy smirk and says, “I’ve got some good news and some bad news.” He tells the whole story but he lost most of us at tuned out with the pigs going kamikaze into the lake. Just like everyone else who had invested so much, I’m going to be thinking, “That’s great for you but perhaps you could go back to being crazy and I could get my pigs back?”

Relate: This demon possessed man was the first person who was told to go and tell rather than come and follow. He was the very first missionary. His past disqualifies him. His knowledge of who Jesus is and what He teaches is also very limited. “Who is he? I don’t know, some guy who heals people and kills pigs. There’s a bunch of other guys who follow him around but apparently I can’t be one of them.”

My past disqualifies me from being a missionary. I’m a failure. I’ve let God and nearly everyone else I know down. Time and time again I have failed. There are plenty of other people without the scarred history and the skeletal closets that I have to deal with who would be far better candidates to serve God. My education disqualifies me. I’m not smart enough, sharp enough, a good enough speaker and I have learned the hard way that I am horrible at learning other languages. I get tongue tied when I have to think on my feet. I just don’t know enough. Hogwash. Literally. Two thousand pigs running into a lake hogwash. Jesus chose a formerly insane man with almost no knowledge of who He is. He then sent that poor guy into a hostile environment. That was the very first missionary, He can use anyone. He can use me. He can use you.

Dear God,
So often I look at myself and see an underqualified failure. I know You want to use me but the two questions that always pop up are why and how. I don’t know why You would chose me to reach my friends, my family, and my world but You did. Help me to be equal to the task. I don’t know how the little I can say will have any effect. Speak through me. If You can use anyone… use me.
Amen