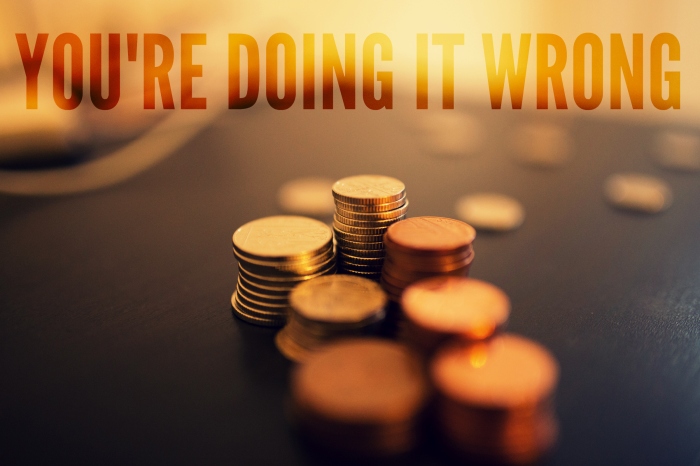 Relate: I would have to say that the worst Christmas in my memory was also the year I had the “biggest haul”. It was on election day in November that year when my father had died from a sudden injury playing basketball. So when Christmas rolled around, well… things were still quite raw. I was out of state in college but there were six younger siblings still living at home. None of those six had even reached their teenage years.

Some of the classmates came up with a great idea and with the help of their parents pretty much motivated the entire town to turn us into that year’s “Christmas charity”. Do you know those huge black hefty trash bags? There were probably between fifty and seventy-five of them in our garage loaded with presents. While I made out well, my younger siblings bade out like bandits and spent a good few hours opening present after present after present, barely even looking at what they were getting before moving on to the next. For all the materialism, there was very little joy involved. We didn’t need stuff, we wanted dad.

It was for the next few years after that when I truly began to understand how people can view Christmas as a miserable, stressful time. How does a poor college kid you buy a present for their preteen siblings who just last year, or the year before, pulled in thousands of dollars worth of gifts? After that, how does a young man laden with college debt find the right gift for kids coming into their teen years?

React: Sometimes, especially during this season, I will meet or talk to people who really feel they are under “spiritual attack”. If they are from a more Pentecostal background I might even hear them say something like, “The devil has really been attacking me lately.” Hogwash. Unless your name is Saint Peter, Saint Paul, Mother Theresa, or Billy Graham I very highly doubt the devil is attacking you. He isn’t omnipresent or all powerful and I’m under the opinion that he is smart enough to concentrate his limited ability to operate where it will have the greatest effect. Things like human slavery, famine, genocide… I think it is fair to say we can see the devil’s work in that. Things like you not getting a good parking spot at the crowded mall, not hearing the timer and that whole batch of Christmas cookies getting burned, or even getting in fights with your spouse and siblings because they are just as miserable as you are… No. That is trouble of your own making. You are miserable because you are doing Christmas wrong. Jesus came to this earth to destroy the devil’s work. Why not make a concerted effort this year to be about Jesus mission?

It was probably a little more than a decade back that I realized that I personally was doing this Christmas thing wrong. Something needed to change. So our family joined Advent Conspiracy before Advent Conspiracy was an official thing. We decided that we would all save up our change over the course of the year then, when we got together for the holidays, we would pool it all together, roll it, count it, then divide the total up and each person would pick an item from the World Vision Catalog (found here) with our share of the change. For example, if there were eight of us home for the holidays and we had $400 total then each would give $50 towards the item of their choice. One of my sisters might buy soccer balls for schools in Africa. My mom would always buy a family a goat. I would give in some way towards victims of human trafficking. Rather than spending hundreds of dollars for unnecessary gifts on each other we would give to those in need. Suddenly, Christmas meant something good again and a good chunk of the joy that had been lost was returned.

Rather than writing out a prayer as the response today, go ahead and pray your own. Then see if you can’t do Christmas right this year. If you haven’t already done so, sit down to write your annual Christmas letter. See if you can’t get to sound something like this:

14 thoughts on “You’re Doing It Wrong”