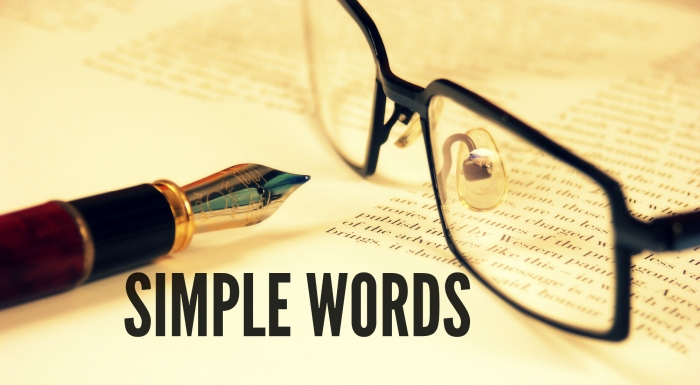 I have spoken of these matters in figures of speech, but soon I will stop speaking figuratively and will tell you plainly all about the Father. (John 16:25)

Relate: I recommended a book to a friend once. Well, not once, I do that all the time for all sorts of friends. On this particular occasion, I recommended one of Umberto Eco’s books. Honestly I don’t remember which one, it was years ago. A few months later I noticed that book wasn’t on my shelf and tracked my friend down to see about getting it back. He told me that he didn’t finish reading it but I could have it back. When I asked if he didn’t like it, he said, “I’m not sure. I just got tired of having to look up every third word in the dictionary.” For a moment I was confused. I don’t remember the language being that difficult. A short while later I had a similar complaint on one of my early blogs (I was a consistent top 50 blogger back in the myspace days). This other friend said to me, “It sounds like you are saying something important, I am just not smart enough to understand what.”

I have been teaching, writing, and editing in one form or another for over a decade now but the real culprit for my 40,000+ word English vocabulary is my reading habit. I have read between 75-100 books a year every year since I started counting (and long before as well.) This isn’t just a habit I picked up as an adult. I read through the nine books of the Chronicles of Narnia in kindergarten. The first time I read through the Bible in a year, I started in first grade and finished in second. I promised myself then that I would never again use the King James to do it. With much reading comes many learned words and I have learned that one of my biggest struggles in writing is to say what I want to say as simply and succinctly as possible. The most important things must be said simply.

React: According to Dr Noel Vose, the greatest theologian of the previous generation, Karl Barth, was once asked by a student at the University of Chicago if he could sum up his life’s work in theology. Barth did not quote anything he had previously written. Although he was able to do so, he did not craft any theologically profound concepts on the spot. Instead he quoted a children’s song: “Jesus loves me this I know, for the Bible tells me so. Little ones to Him belong. They are weak but He is strong.”

Paul was another great theologian who tended to get a little verbose at times. He was going so long into the evening one night that one of the kids in the local youth group fell asleep, fell out the window, and died. Paul just walked down raised him up… and continued preaching all the way till morning. Peter, the guy to whom Jesus said, “Upon this rock I will build my church.” said in one of his own letters, “Sometimes Paul can get a bit tough to understand.” When this long winded, hard to understand Paul wanted to get down to the brass tax, He could not have said it any clearer: “I passed on to you what was most important and what had also been passed on to me. Christ died for our sins, just as the Scriptures said. He was buried, and he was raised from the dead on the third day, just as the Scriptures said.”

When Jesus said, “Soon I will tell you plainly all about the Father,” He was talking about the same exact thing that Barth and Paul point to. He was pointing towards the cross and the empty grave. There could be nothing more simple. There can be nothing more profound. If you want to know God, you do not need to dig into any deep theological treatises. They have their place but the nature of God will not be found through an abundance of verbosity. The true nature of the character of can be summed in two simple statements. God loves you so much He died for you. He is so powerful that even death could not keep Him down.

Dear God,
Your Truth is so simple that even the youngest child can understand it. Yet it is so profound that the greatest of minds cannot even begin to scratch the surface. Thank You for revealing Yourself with such simple words and actions that no one can ever claim to be unable to understand it. Help me to share the truth of who You are with equally plain speech. With every conversation in which You come up, help me to represent You well.
Amen.