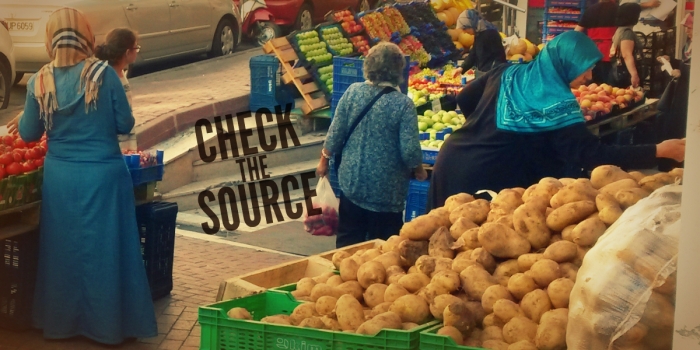 But if you remain in me and my words remain in you, you may ask for anything you want, and it will be granted! When you produce much fruit, you are my true disciples. This brings great glory to my Father. (John 15:7-8)

Relate: I have become quite good at picking my grapes. If I feel as though I will be skipping or having a late lunch, I will try to pick up some grapes to snack on. I have made it a personal goal to get just enough grapes that, once weighed and priced, it will cost me exactly one lira. Today it came to 0.95tl. Last time I had 1.02tl. I’m not perfect, but I am usually close. The trick is to find a good, full vine, and then cut it at about the two third’s point. If I am going green, it is a little lower than red because those vines tend to hold more. Also, for some strange reason, it seems that Antalya grapes are a little heavier than Gaziantep grapes. Maybe that’s just in my head, but I’ve taken to paying attention to the source.

Check the source. Like I said, perhaps the difference from the origination of those grapes is only in my head, but for me, it makes a difference. Way back when I was a kid in Syracuse, we used to grow grapes in our backyard. We didn’t grow many and they were rarely as bountiful as those I will find in a market, but that is mostly because we weren’t very diligent. Unlike the raspberries and black caps, and unlike the pears we also had, those grapes took work that none of us invested. There was never enough pruning. Sometimes vines would be stretching along the ground rather than on the fence. If I could find a half dozen grapes worth eating, it was a good day.

Where we used the fence, and most professional growers today would use stakes and poles, in Jesus day they were planted in orchards and then pruned that they would grow in the trees. The human (branch) and the divine (vine) would become so intertwined as to almost seem one. From a cursory glance, a city slicker might be forgiven if suckered into believing grapes grew from trees.

React: A lot of what is masquerading as Christianity is nothing more than tree with no vine. It is branches bearing no fruit. People point to the “grape tree” and then blame God for the barrenness of his church. Some of what appears as fruit is actually inedible poison. Without checking the source, people have picked it, and died. We need to be more careful to check our sources. Is what we are saying or hearing grounded in Jesus? Is our source the living and breathing Word of God who still makes His dwelling among us? Just because something might be found on the tree of Christianity does not mean its source is from the vine of God’s truth.

7 thoughts on “Check The Source”