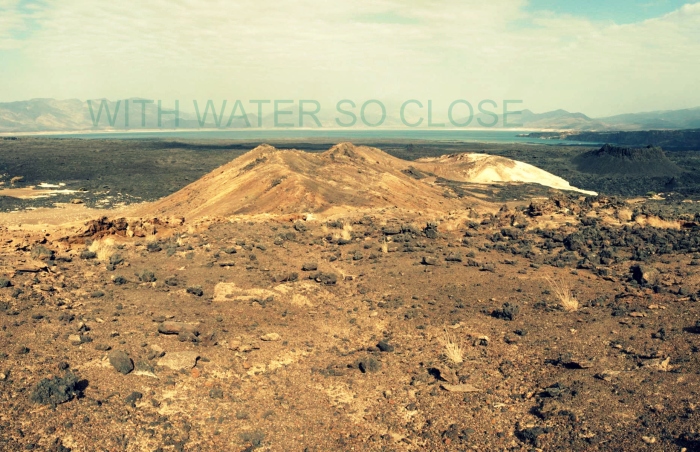 Jesus replied, “If you only knew the gift God has for you and who you are speaking to, you would ask me, and I would give you living water.” (John 4:10)

Relate: In a recent issue of National Geographic there was an article about Paul Salopek. He has embarked on the out of Eden walk. Basically, starting in the Great Rift Valley in East Africa, where the oldest bones believed to be human have been found, he is traveling all the way across Asia and the Americas to Tierra Del Fuego in South America. He is following the journey of humanity as it has spread to every corner of the earth.

On this journey he writes of how he is walking across the Ardoukoba lava fields in Djibouti, Africa. Paul has been on this year long global journey only six weeks when he begins to see the bodies in this field. Water is scarce and in this area it is even worse than the previous dryness he experienced along the length of Ethiopia and in Djibouti. That said, Paul is also travelling a route that many others, far more desperate than he is, have traveled before. It is at the coast ahead that many poor and desperate Africans ferry across to work of a pittance in the Middle East. To get to that coast they must first cross these lava fields and Salopek comes across plenty of evidence that hundreds, even thousands, did not make it. He says that there are so many bodies that the few predators in this desert haven’t even bothered to feed on them. He is wondering about one of the last of these victims he came across as he finishes this leg of his journey when he writes, “Brave, foolish, desperate travelers. You almost made it. You fell three miles from the coast.”

The rule of thumb is that a person can live only three days without water but it is actually a bit more than that. If a person remains completely sedentary they might make it past a week. These desperate travelers probably lost their gamble to get to the coast somewhere short of that. Slowly their diminishing supply would run out. Their rations would become smaller and smaller and the length between each would grow longer and longer until, finally there isn’t another drop. For a while the already desperate and delirious traveler would push on until they could do so no more. Finally, they would lay down to rest, never again to rise.

React: How many have died when the water was right there within reach. As desperate as these travelers were, there are many others on a spiritual journey of even greater import. They are on a hard and weary journey looking for the hope of a better tomorrow. There is the longing for something more. There is a need for something greater. But they grow tired and weary along the way. They stop to rest… never to rise again. The water they need for life. The hope they are desperate and searching for is much closer than three miles away. It is as close as their next heartbeat. We as Christians have an overflowing abundance flowing out of us, but how often have we been withholding it from those in need?

God, I thank You that You have given to me that living water when I was desperate and thirsty. You are the living water. You have promised that out of me would flow these same streams but my foolish fear and pride and uncertainty has kept me all to often from sharing. Forgive me for this. Let me hoard it no longer. There are those around me who are desperate and dying. Let them come to You and drink.