There is no judgment against anyone who believes in him. But anyone who does not believe in him has already been judged for not believing in God’s one and only Son. (John 3:18)

Relate: Almost as inane and far more lasting than the stupid phrase, “Yolo” is the response, “Don’t Judge Me”. It is the attack of a guilty

conscience. I can’t tell you the number of times when somebody asks my opinion about something. Or they ask me what the Bible says about such and such. Then, when I give them an answer they didn’t want to hear, they quickly respond back with something like this statement on the left. 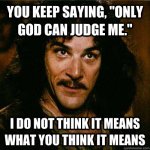 They’ll even throw in the old, “Doesn’t the Bible say not to judge?” To that, I’m tempted to respond with something to the right. It seems that everyone who knows anything at all about the Bible knows that it says, “Don’t Judge.” Or so they seem to believe.

Let’s put aside a minute the fact that more often than not I haven’t been judging. The condemnation they feel is coming from conviction inside. After all, even those who do not have a working knowledge of the commands of God have an innate sense of right and wrong. As Paul says, “They demonstrate that God’s law is written in their hearts, for their own conscience and thoughts either accuse them or tell them they are doing right.” So the judgment felt is not somebody else judging them but rather their own guilty conscience rising up in agreement with the truth they heard.

On the other hand, all too often Christians do seem to be about the work of God. That verse all so often referred to is from Matthew 7, “Do not judge others, and you will not be judged. For you will be treated as you treat others. The standard you use in judging is the standard by which you will be judged.” There is a lot I can say about this, a lot I would love to say about it but since this is a devotional, not a sermon, I will simply say here that when we as Christians judge, we are judged as being judgmental. God can bring judgment. God will bring judgment. Let us, until then, bring love instead.

React: Ultimately judgment will come. To all those who throw around, “Only God can judge me” as if they were Tupac, I would say, “Stop acting so proud and haughty! Don’t speak with such arrogance! For the Lord is a God who knows what you have done; he will judge your actions.” (1 Samuel 2:3) To those going through Job-like suffering and injustice, “Don’t worry, judgment and justice will be upheld.” (Job 36:17) To those who think they have all the time in the world to do whatever they want, “Therefore, I will judge each of you… according to your actions, says the Sovereign Lord. Repent, and turn from your sins. Don’t let them destroy you!” (Ezekiel 18:30) And, “Each person is destined to die once and after that comes judgment.” (Hebrews 9:27)

When that judgment comes, it will really boil down to just one question: “What did you do about Jesus?” To those who ignored Him, doubted Him, or denied Him, there is no hope. They have been judged already. To those who gave Him lip service but nothing more, “Not everyone who calls out to me, ‘Lord! Lord!’ will enter the Kingdom of Heaven. Only those who actually do the will of my Father in heaven will enter.” (Matthew 7:21) But for those who have surrendered their lives to Him, there is no judgment.

God, I am so thankful that I have been forgiven. I deserved to be judged. I am guilty. But You have served my sentence. You have paid my price. I am swimming in Your grace. Help me to live out that grace and forgiveness with those I come into contact with. Help me to not try and play the part of the Holy Spirit. As I speak truth, help me to do it without condemnation. Help me to radiate Your love. One day that judgment will come, but I have no place among the jury. You alone can judge.