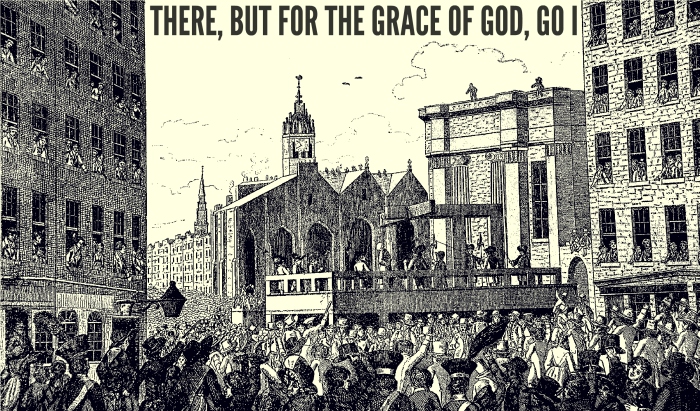 In Solomon’s old age, they turned his heart to worship other gods instead of being completely faithful to the Lord his God, as his father, David, had been. (1 Kings 11:4)

Relate: At thirty-eight years of age, John gave up his legal studies and secular job (he was paymaster for the English army under Henry VIII). The term “born again” would not be coined for such experiences for centuries, but because of the “religious experience” he had, John left all that behind and went back to college to study theology. He was so diligent and passionate in his new calling that out of respect, his classmates nicknamed him “Holy Bradford”. For three years after becoming ordained in 1550, John served as part of the Church of England. Then Mary Tudor, bloody Mary, came to power. He was soon arrested on the trumped up charge of “trying to stir up a mob” and after a bit of prison time in the Tower of London, John Bradford became a martyr, burned at the stake in 1555.

Most people will not know his name, but he did make a ten word statement that I am sure you have heard. While still a pastor, he saw some prisoners in Lancashire walking the road to their hanging. Pointing them out to someone nearby, “Holy Bradford” said to the man, “There, but for the grace of God, goes John Bradford.” Those nearby who heard it probably shook their heads in disbelief. These were dirty, filthy criminals deserving of death. They were as different from their pastor as night and day. While they saw it, and I often hear it quoted, as a holy sentiment, John Bradford really meant it. And because he meant it, it would never ever become true.

React: A few days back, under the title Man Rules, I shared a bit about King David’s last words. He was one who finished strong. How sad that his son, who had started out so well, would end up falling apart and falling away. Solomon had it all. He had a legacy of godliness in his father, he twice saw God in a vision, God granted him wisdom beyond that of anyone else ever. He built the Temple for goodness sake. If anyone had a road paved out for them of a lifetime of holiness and righteousness, Solomon was it. How sad that in spite of all that, in his old age, he walked away from God.

I have written it here and just this week I said it in a conversation that I am not just a Christian. My Christianity defines who I am. I seriously, honestly cannot imagine living any other way. I wouldn’t know what to do with myself if I am not following after Christ. I am sure Solomon, in his earlier years, could have said much the same things. So it is with humility and gratitude in the keeping power of Christ that I point to the road he walked and say, “There, but for the grace of God, goes Beejai.”

God, I am so grateful for Your saving grace. Although I don’t deserve it, and in a thousand lifetimes of effort would never be able to do enough to deserve it, You chose to pour it out on me freely. In the same way I am also grateful for Your keeping grace. Every single day that I continue to follow You, every step that I take towards You, is only because You continue drawing me to Yourself. Help me to ever be obedient to that beckoning. Help me, day by day, hour by hour, breath after breath, continue to follow after You until that time when You finally call me home.