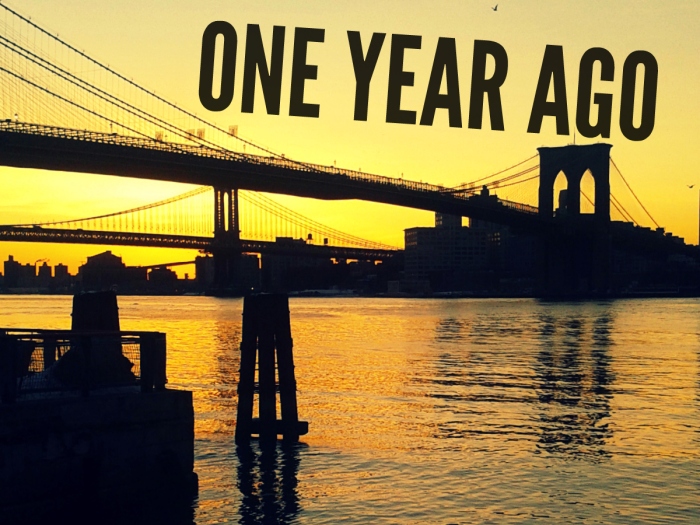 A year after Israel’s departure from Egypt, the Lord spoke to Moses in the wilderness of Sinai. In the first month of that year he said, “Tell the Israelites to celebrate the Passover at the prescribed time, at twilight on the fourteenth day of the first month.” (Numbers 9:1-3)

Relate: The above picture is one I took of a sunrise over the Brooklyn Bridge on my second to last visit to New York City. That picture was taken just over one year ago on March 4th. I was planning to visit the Turkish consulate in NYC and decided to make a daycation of it seeing some of my favorite places and haunts one last time. It ended up being cold and wet all day so I mostly only hit the Met and the big library downtown. (I’m a nerd, what can you say?)

The next time I was to visit New York City, I saw very little except Port Authority where my bus landed and then the commute over to JFK where I would sit for over twelve hours waiting for my delayed flight to finally leave. That meant that I would miss my transfer and end up spending just as long at an airport in Moscow. God brought two million Israelites out of Egypt in one day but it took Aeroflot two days to shuttle just one person from NYC to Istanbul.

Anyways, I had no idea then how much would change in my life over the course of a year. My perspectives, my personal habits, and even my personality are in many ways vastly different then they were when I was taking that picture a year ago. Sometimes it is hard to see in the day to day, but I am so glad for where God has brought me, and is still bringing me. It is good to take a moment to look back and say, “Wow, God. Thank you.”

React: My change is small potatoes from what Israel must have experienced. Just think of where they had gone from one passover to the next. They were slaves but now they are free. They watched the greatest nation on the earth brought to its knees and as a byproduct they have gone from rags to riches. After that there’s the Red Sea along with the drowning of Pharaoh’s army. Then Mount Sinai lit up with the manifest presence of God, He spoke to all the Ten Commandments and then gave Moses further instructions, twice, for forty days. In between, there was that golden calf (oops). When Moses finally rejoined them his face was glowing. They built the Tabernacle. Oh yah, those pillars of cloud and fire have been leading them along the whole time. Since they’re there every day, it is easy to take them for granted but do you remember the first time they saw it? Can’t believe that was less than a year ago. Things are just so different.

Where were you a year ago? How have your struggles and strengths changed? Have they changed? How has God blessed you since you first flipped the calendar over to March, 2015? What friends have left you? What family has graduated to heaven? Whose facebook walls lit up with “It’s a girl/boy!” Take a moment to look back over this past year at all the great things God has done for you and just tell Him thank you. Then take one more and dream of what He might have in store. This is going to be a very good year.

Dear God,
Wow, I am just so thankful. Sometimes I get caught up in the frustrations of the day to day. I can easily allow that missed appointment or rowdy class to ruin my day. But when I step back and look at how far you have brought me, I am so grateful. Help me to appreciate more all that You have done. Help me to dream bigger for what You are going to do. You are so good.
Amen.

5 thoughts on “One Year Ago”