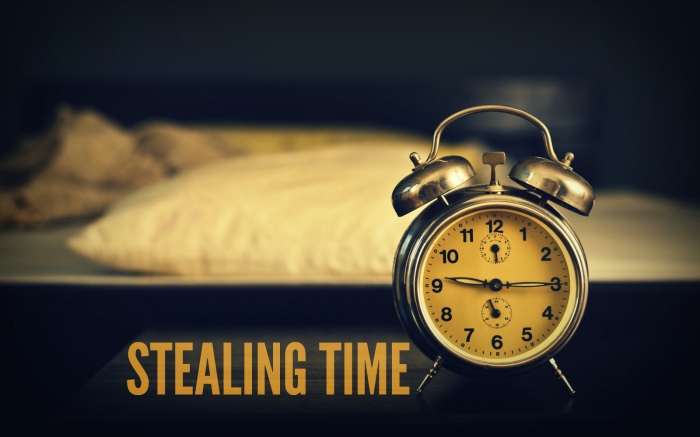 He said to them, “The Scriptures declare, ‘My Temple will be called a house of prayer,’ but you have turned it into a den of thieves!” (Matthew 21:13)

Relate: I did it again this morning. My first alarm clock is the sound of a gentle flowing brook along with some harp music. It isn’t very loud and I am not supposed to wake up to it. Its purpose is to pull me from deep sleep to near consciousness. My second alarm goes off five minutes later. It is a very loud rendition of the theme song for Empire Strikes Back. Even when that first alarm doesn’t bring me right around, the second has me fully awake and aware enough in no time.

Unfortunately, that means my right thumb is on my phone sliding that yellow snooze to the left all too quickly. On a rough morning I will do this a couple times before groaning my way out of my bed. On a really rough morning I find myself sliding the red off to the right instead. This was one of those mornings.

The reason it happened was because I found myself playing Madden last night. I am not a fan of American football and I haven’t played the game in years but with the Super Bowl right around the corner, I got the urge. So I loaded it on my computer, created a new team (Besiktas Black Eagles), and played my way through two thirds of a season. That took me into the wee hours of the morning so when the alarm went off, I was not a happy camper.

React: Jesus said, “The Scriptures declare, ‘My Temple will be called a house of prayer,’ but you have turned it into a den of thieves!” I don’t think the issue was so much the buying and selling of animals. I have heard all kinds of arguments and elaborations on this point and if you disagree with me, that’s fine. You have every right in the world to be wrong. 😉 Seriously, though, I think the issue was more where they were doing the buying and selling. It took place in what was supposed to be the court of gentiles. This was supposed to be where the non Jewish believers would come to worship God. Can you imagine the how difficult that would be to do with all the commotion going around them? Imagine going to the main entrance to your local mall during the weekend before Christmas. Put some worship music on but only wear one headphone. Now try having some prayer time right in the middle of all that hustle and bustle. Yes, it is possible but incredibly difficult. That is how I imagine these gentiles felt during passover.

In the new covenant, we the people of God are the temple of God. Are we houses of prayer? Am I? Not today I wasn’t. Don’t get me wrong, I don’t think there is anything implicitly wrong with playing a little Madden, or watching some innocuous TV show, or whatever your down time might be. After the week I’ve had, I needed a little down time. It is good and healthy to have a past time. The trouble comes when the past time begins to interfere with the prime time. My primary purpose as a follower of Christ is prayer. There is nothing more important that I, or any of us, can do. So when my late night impulse took me to the point I didn’t put my first thing first this morning, that was theft. I have been stealing time from God.

Dear God, more than anything I want to spend time with You. More than anything I want this temple, which is my body, to be known as a house of prayer. For those times I have stolen from You, please forgive me. For those moments I have slept away, or read away, or… forgive me. Help me to be alert and vigilant in those moments my hobbies begin to cross over into obsessions. Let my life, let my words, and let my time bring glory to You alone.