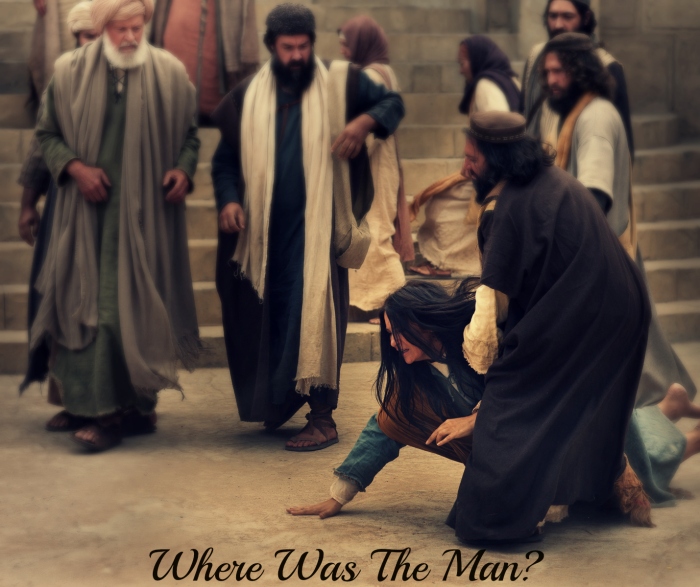 Relate: If I am walking through the woods with a group of people and we happen to come across an angry hungry bear, it is best to run. I have realized, though, that I don’t really have to worry about running faster than the bear. All I have to worry about is that I am not the slowest person in the group. As long as I can stay ahead of the person next to me, I won’t be served up for dinner. He will.

My initial reaction when I begin reading what is one of my favorite stories in the gospels is that age old question, “Where was the man?” The woman couldn’t have been alone when she was caught in the act. It does take two to… um… tango. Was he, like the bear scenario, simply a faster runner? Did she try to cover herself for modesty’s sake while he ran like the boy in Mark 14:52? Did he shove her into the mob as a means of his own escape?

Or perhaps there were more nefarious intentions at play. Perhaps he was someone more “respectable” while she was a mere prostitute. Perhaps he was wealthy and they knew he could hook them up with a bribe later. Perhaps he had the goods on a few others and they didn’t dare “catch” him for fear their own sins would be brought to light. If that was the case it is easy to imagine what Jesus was writing on the ground. Perhaps he was a man while she a woman in this archaic, misogynist, bigoted culture. One has all the influence and the other is little more than property. As one prayer of that time goes, “God, thank You for not making me a dog, a woman, or a gentile.”

React: Whatever the reason, the adulterous woman was brought alone before Jesus. It isn’t fair. I find that happens a lot in sports. The refs always seem to respond to the reaction. In soccer he bumps me, I bump him back and I’m the one with the yellow card. In basketball, I return the elbow he threw and he is the one going to the line. It isn’t fair. It isn’t just, but that does not make me any less wrong for what I did. It wasn’t fair that the adulteress was brought alone to stand before Jesus, but she was still guilty.

One day each and every one of us will stand before the Judge and we will have to give an account of our sins. It will do me no good to point to Hitler and say, “He was a lot worse than me.” Stalin’s sins, Pol Pot’s sins, even my parents and my friends sins will not matter one iota when I am being judged alone. The only valid place I will be able to point my finger will be to Jesus. The only valid defense I can give is this: “He has already payed the penalty for my shame.” The guilty woman’s only hope was found in Jesus, and so is mine.

God, help me to avoid playing the comparison game. Help me not to look to the left or to the right when trying to determine how well I am doing. Let me only look to You. Keep the words, “It isn’t fair” or “It isn’t just” from ever entering my lips. The truth is, if right and fair were served up I would have no destination but hell. Let me never forget that You are the standard. You are my hope. My everything lies in Your hands and relies on Your mercy.