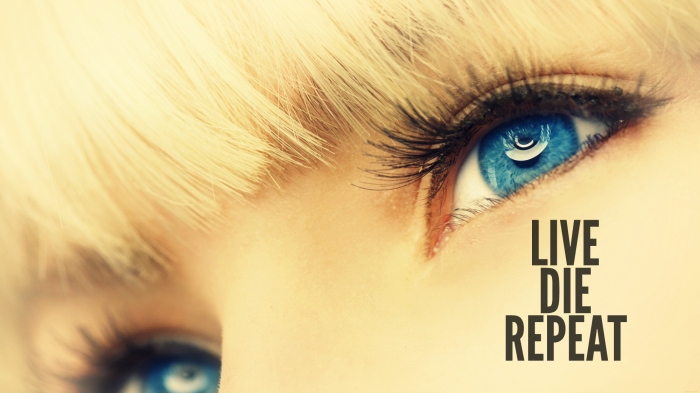 Just as each person is destined to die once and after that comes judgment,  so also Christ was offered once for all time as a sacrifice to take away the sins of many people. He will come again, not to deal with our sins, but to bring salvation to all who are eagerly waiting for him. (Hebrews 9:27-28)

He is supposed to be an army war correspondent but things go horribly wrong. Major William Cage tries to refuse a command to go in with the soldiers when they attack their enemy. He prefers to be a war reporter far from the front lines but Cage finds himself an infantry grunt in a futuristic version of D-Day. But this time the “invasion of Normandy” ends in disaster. The enemy knew and was ready for them and Cage finds himself an early victim of what is quickly turning out to be a catastrophe.

Fortunately for Cage, or unfortunately depending on your perspective, his story does not end with a horrible death on that beach. He wakes up at the start of the same day in which he just died. He goes through the same few hours, gets killed again, and wakes up again. Then again… and again. Over and over Cage lives through the same horrible day. Eventually, he meets up with someone who has experienced the same thing earlier. Although he has to reintroduce himself to her each new (or not so new) day, the two eventually try to work through a plan to win this war. With each death, they get a little closer. They learn from their mistakes and make a little more progress each time until finally, ultimately, they win the war. It is a really great movie and if you haven’t seen it, I strongly recommend you check out Edge of Tomorrow.

As a movie concept, this Groundhog day type scenario is relatively unique. As a religious concept, it has snookered hundreds of millions of people down through the centuries who have bought into the lie that we can get as many do-overs as it takes to get it right and “achieve” heaven. This view has proponents from Plato to Buddha to possibly Rob Bell, including every major Indian religion (not Native American).  People just want to believe that we will get to have more opportunities beyond death to “get it right”. If you’ve messed up, no worries, better luck next life. If only it were true.

We have only got one shot at this life. It is vitally important that we make the most of it because eternity rides in the balance. There are no do-overs. There are no second chances. It is appointed man once to die. Then… Well, most certainly not “Live. Die. Repeat.”

Dear God,
It would be so nice to get as many chances as we need to do things right. It would be great if we could repeat a day or a life over and over again until we get it perfect. But even flirting with this concept causes me to devalue the time and the life I do have. It is so much easier to waste time when I might believe I have all the time in the world. It is so much easier to give in to the wrong choices presented if I know I have many future opportunities to do it right. Help me to have a deeper respect for the limited time and the eternal importance of each decision I make. Help me to live as though I really, truly understood the truth that there are no repeats and do-overs.
Amen