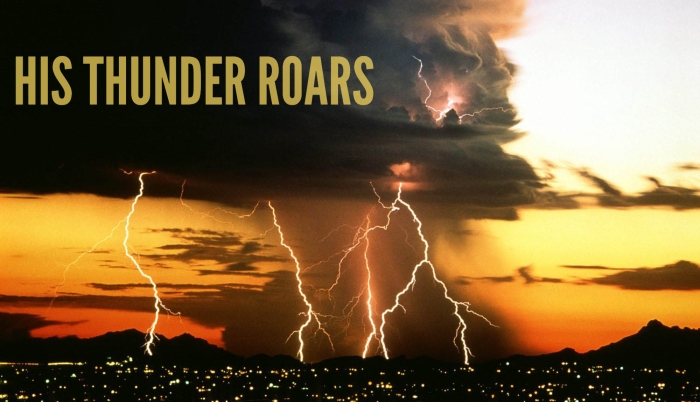 God’s voice is glorious in the thunder. We can’t even imagine the greatness of his power. (Job 37:5)

Relate: Part of growing up in a big family was that we tended to have big vans. Some little minivan wouldn’t have fit all of us. No, we had a big blue monster reminiscent of what most churches used back in the day to cart their youth group around to camps and retreats. After that we got a tricked out conversion van with the roof high enough that I could stand straight up in it. I was on top of one of these vans laying on my back when my mom called from the front door. “Brian Jaimeeeee, Get off the van and get inside the neighbors are calling!”

God bless my neighbors. They really did care. It just… concerned them that a high school kid would be laying down on top of a car in the middle of a thunderstorm close enough that every roar is rattling the windows. They must figure it probably isn’t safe up there. They just don’t understand that the only better view of the storm is from the roof and once a big downpour like this starts, it is quite difficult to get up on the roof. It is not impossible, just time consuming, and that is time in which I am missing out on the beauty and majesty of the storm. These things don’t last forever.

React: I still smile when I see a beautiful lightning bolt on the horizon or hear the ground shaking crack of thunder from a bolt practically overhead. One average bolt of lightning has enough power to light thirty thousand homes for a day and to see the reckless abandon with which such power is thrown about is still inspiring. There are about fifty lightning bolts thrown more than three miles from heaven to earth or across the skies every second. How can such power, used so flippantly not inspire? God’s voice is still glorious in the thunder and the greatness of His power is still so far beyond our imagination.

Dear God,
The power You display in the thunder, God, is oh so inspiring. Knowing the facts is one thing, but feeling the rumble does something in me right down to the core. Seeing the lights flicker as it cracks right overhead does far more than the numbers or statistics. Let Your power do the same in my life. Bring it closer. Let it invade my environment and tear down my complacent security. Your power is beyond imagining. Let me know that with every fiber of my being. Let it thunder through my life.
Amen

9 thoughts on “His Thunder Roars”