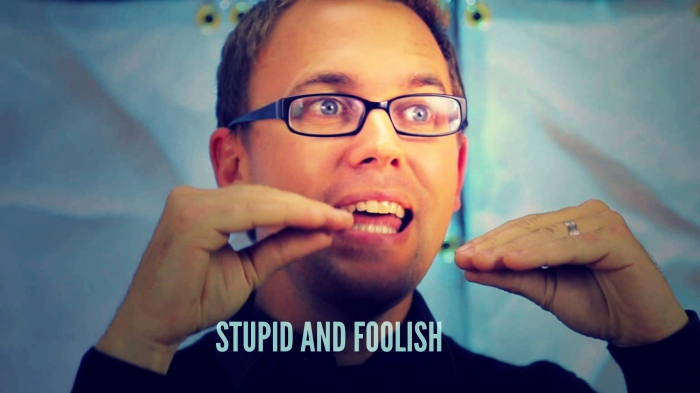 It is God’s will that your honorable lives should silence the ignorant talk of foolish people. (1 Peter 2:15)

Relate: Remember those Red Christmas cups? Was it last winter? No. I think it was two seasons back. Starbucks decided they were going to do a simple, minimalist Christmas design and made plain red cups. Apparently this meant that they were the spawn of Satan hell bent on destroying everything that was good in the world.  Ummm… really?

Then of course for more than a year there was, and still is the endless facebook rants leading up to the election. Granted, this was probably the poorest selection of candidates America has had for at least a century, but never before has there been such a great platform for so many people who have no clue to go on and on and on about the most pointless of minutae.

Most recently the NFL has come under heat. One or two players were making a conscientious decision to kneel during the national anthem as a statement against inequality. There was a little talk here and there for or against what they were doing but it was not really that big of a deal. Then Trump tweets (somebody should really confiscate that guy’s phone, for America’s sake). The next Sunday hundreds of athletes are now kneeling in “solidarity”, the NFL is issuing statements, the sports talk shows are all weighing in and once again facebook is aflame with the ignorant talk of foolish people. I really wish I could say I was not one of them, but I have to admit that I did get sucked in… again.

React: A couple days back I had a student in one of my classrooms who decided that he wanted attention. I would try to correct him or use my normal carrots and sticks to get him to behave but nothing would work. So I worked around him. I stood with my back to this student and addressed the rest of my class. “Don’t talk to him. Don’t laugh. Don’t even look at him. Just pay attention to me. Ignore him.” The rest of the class said “OK, teacher” and did their best to comply. An amazing thing happened. Once this seven year old boy realized he didn’t have the audience he wanted, his tantrums, noise, and disruptions stopped. Once he realized he would get no attention, positive or negative, he suddenly returned to his normal self and rejoined the rest of the class.

Peter is telling the church the same very thing I told the class. “Don’t give these idiots your attention. Don’t debate them. It’s a stupid argument anyways. Simply keep your mouth shut and do what’s right. Then they will have nothing to say.” I wonder what would happen if we as adults lived as wisely as the rest of my first graders did that day. Would attention craving hacks like the Feuersteins and the Trumps of the world continue to say dumb things if the rest of us simply ignored them and continued on doing exactly what we should be doing? What would happen if we… if I, decided that I will be less concerned with others thinking right and more concerned with me living right?

Dear God,
Help me to remember that I am not part of your legal defense team. You haven’t given me the responsibility of being your thought police. I am a member of your PR team but then you have given us instructions to make the world know that first and foremost of your love. We have failed, I have failed to represent you well. Forgive me for that. Help me to spot a stupid and foolish argument for what it is and help me to avoid the need to get sucked into such nonsense.
Amen