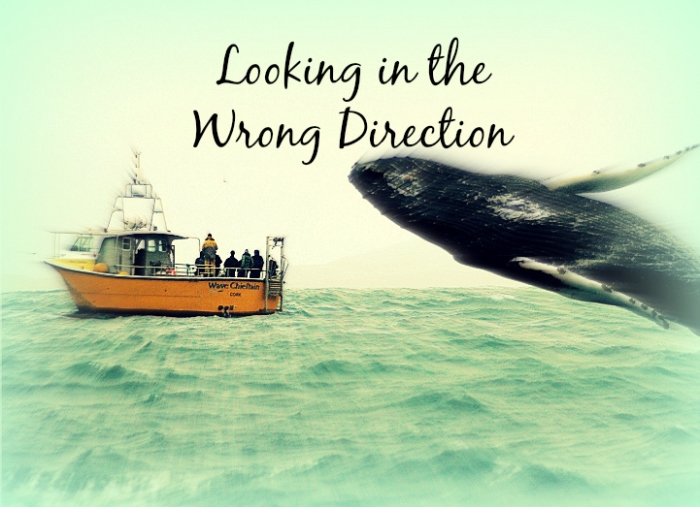 For I have come down from heaven to do the will of God who sent me, not to do my own will. And this is the will of God, that I should not lose even one of all those he has given me, but that I should raise them up at the last day. For it is my Father’s will that all who see his Son and believe in him should have eternal life. I will raise them up at the last day.” (John 6:38-40)

Relate: Just browsing along the internet the other day I came across an interesting picture. There was a boat full of whale watchers. They were on an expedition somewhere near Ireland and the cameras were all up as everyone was looking at what must have been a whale somewhere in the far distance. Meanwhile, on the other side of the boat, this beautiful humpback whale launched itself out of the water high enough and close enough that when it lands, all these whale watchers backs were going to be getting quite wet. Unfortunately not one of these whale watchers was looking in the right direction. Not one. They had the opportunity of a lifetime right before them and every single one of them missed it.

React: Imagine a boat filled with people who are all looking for Jesus. They are all there and each of them has their own view, somewhere off in the distance, that they believe is the right view. You have a deist like Thomas Jefferson in the boat. He says Jesus was a great moral reformer and teacher but we need to use reason to overcome the silly superstition that Jesus was born of a virgin and performed all sorts of silly miracles. John Lennon is in the boat. He says Jesus isn’t about a person so much as what is in each of us. The actual Jesus was just someone like Mohammed and Buddha who understood truths we can all tap into. A Buddhist in the boat agrees. Jesus was an enlightened man, a Bodhisattva, who proved at the cross that he had moved beyond the desires and the trials of this life. A Muslim on the boat vehemently disagrees. He quotes the Quran: “They said in boast, ‘We killed Christ Jesus the son of Mary, the Messenger of Allah’, but they killed him not, nor crucified him, but so it was made to appear to them, and those who differ are full of doubts, with no knowledge, but only conjecture to follow, for of a surety they killed him not.” He then tries to explain how Jesus found a volunteer to die in his place while he ascended back into heaven. A Hindu disagrees with most of the others on the boat in claiming Jesus truly is divine. Just like Rama and Krishna, Jesus is one of the many “ishtas”, or forms of the divine found throughout history.

Back and forth these watchers in the boat talk. They are looking off into the distance. Each is convinced that they have the final word on who Jesus is and tries to point their fellow boat mates in the right direction. In the meantime the Word has been made flesh and dwells among us. If they would simply turn around, they would simply see. The Bread of Life, the Good Shepherd, the Gate, the Living Water, the Light of the World, the True Vine, the Way, Truth, and Life, the Son of God, the Great I AM, is right there plain as day. The reality of who Jesus is supersedes and is far more beautiful than any imagined understandings glimpsed as if in the distance. All who look to Him will be saved, yet in one way or another so many have their backs turned. Do you?