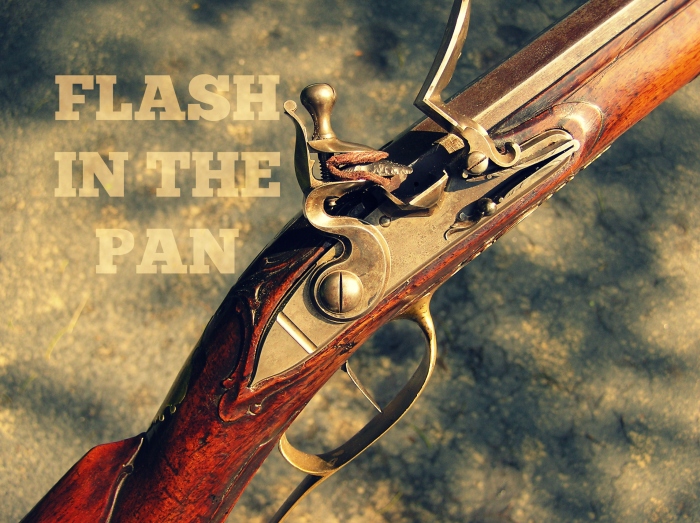 In fact, you sent investigators to listen to John the Baptist, and his testimony about me was true. Of course, I have no need of human witnesses, but I say these things so you might be saved. John was like a burning and shining lamp, and you were excited for a while about his message. (John 5:33-35)

Flash in the pan. Fifteen minutes of fame. These are two derogatory metaphors we might use today to talk about something or someone who came and went without leaving any permanent impact. They are both negative because we have a desire, and rightly so, for dedication and permanence. We say we want commitment and long term even though we are living in a fast food, drive through culture.

The term flash in the pan actually came from the days of flintlock rifles. I’m not all that knowledgeable about firearms past or present. They don’t really interest me much so forgive me if I butcher this explanation. Apparently there was something on these rifles called a priming pan. A small charge was lit here that was supposed to pass through something called a touch hole. When it did so this would ignite the real charge shooting the bullet out to kill its target while the gun itself kicks back to bruise the shooter’s shoulder. Sometimes the first charge did not pass through the touch hole and so the attacker would instead find himself gutted by his enemy’s bayonet. This misfire was called a flash in the pan or a fluff in the pan. There was a flash but no follow up bang. All the potential was there, the expectation was there, but nothing came of it.

React: Just because something was short lived does not mean it was impermanent. Longevity does not always translate into effectiveness. A pastor can spend decades in a church but if the people aren’t being motivated and mobilized he isn’t truly a leader. If people are not getting saved and discipled, if there is no conversion growth, then he is just wasting time. On the flip side Jim Elliot only had a couple very brief (and fatal) encounters with the Huaroni Indians yet his very short outreach forever changed that entire people group and his story still impacts, inspires, and motivates missionaries and missions movements six decades later. He was no flash in the pan.

Jesus and John also had very brief ministries. Jesus’ lasted only a few years yet no one else has had as much impact on our world than He did during His short ministry. John’s was even shorter and should be measured in weeks and months rather than years. Even though it was so short, Jesus Himself said that of those born of women none is greater than John. If you’ve been considering doing a missions trip but wonder how much of an impact you might have in a short time, stop wondering. Be obedient to God and go. You can never know how much of a lasting impact one conversation or one act, done in faith, can have. If you have been wondering how much of an impact you might have had with those who have briefly crossed your path. Keep praying for them. This side of heaven we will never know the impact we have had.

What I am about to say next is not for everyone, but I feel I must be obedient to what God has placed in my heart. There is someone reading this who God has told you to move on. You have been hesitating because you feel you have not been in your current place of ministry a “respectable” length of time. You’re afraid of what others might think of you leaving after such a short time. Be obedient and go. He has great things in store for you but if you are not obedient to His calling you will spend the rest of your life being respectable… and ineffective.

God, I pray for effectiveness. More than duration, help me to focus on obedience. If You tell me to go, give me the courage to go. If You say stay, give me the strength to stay. Whatever the calling, use me. Don’t let me be a flash in the pan, all show and potential but no impact. I pray that the soil I am obedient to sow into would be ever ready to receive what You have. Bring a harvest for Your Kingdom’s sake. Above all, let Your Name be ever honored and glorified.