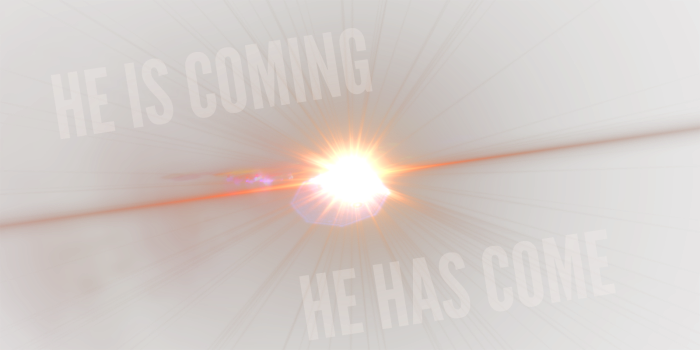 The one who is the true light, who gives light to everyone, was coming into the world.
(John 1:9)

Relate: The one who is the true light… There truly is only One who is the light. Yes, there are all kinds of false lights. Buddha is a false light. He preached that with right intention, action, effort, and concentration one can truly find oneself and annihilate suffering. Yet he ate some bad pork and fell violently ill, never achieving that deathless state he prophesied for himself. Muhammad is a false light. According to the earliest sources, when Muhammad first encountered what he believed to be the angel Gabriel, the angel choked him and commanded him to “recite”. It was only after the third such choking that Muhammad relented. In contrast, nearly every truly Biblical encounter a person has with angel begin with the angel saying, “fear not”. Muhammad left that frightful encounter fearing that he was demon possessed. He was probably right. To be fair, I also have the potential to be a false light. Every time I try to bring attention to myself or take credit for the gifts God has given me, every time I try steal the glory that belongs only to God, I am no better than Satan. It was for this that he was thrown from heaven. There is only one true light, and it is Jesus alone.

Who gives light to everyone… Strange as it may seem, everyone means everyone. When Jesus came to this earth, He came for everyone. Granted, not everyone chooses to believe in Him (that’s for tomorrow), but this world is a better place because He came. How many millions of mouths have been fed because of those inspired by the loaves and fishes? How many charity organizations exist thanks to the example of the widow’s mite? Samaritan’s Purse and the millions of Christmas gifts they give out globally each year, would it ever have happened had Jesus not told the story of the good Samaritan? By leaps and bounds this world is a far better place because Jesus came. Am I making it a better place as well? If not, can I truly say that I am following Him?

Was coming into the world… For centuries, for millennia, the children of God had been anticipating the coming of God. Under the domination of Egypt, then Assyria, then Babylonia, then Persia, then Syria, and finally Rome with only brief and occasional gasps of true freedom and independence, they desperately yearned for the coming of the Messiah. Then John shows up. Can you imagine being of of his disciples? The Messiah is coming and He is coming soon. Very soon. It is no longer an ambiguous hope for a distant future, it was the first thought of each morning. “Will this be the day?” Finally, one day down by the Jordan River John stops his preaching mid sentence. With a visible excitement as he is nearly jumping out of his skin, John points and shouts out, “Behold, the Lamb of God who takes away the sin of the world!” It is no longer, He is coming. Now… He has come.

React: The early church lived in that same anticipation. Those who saw Jesus ascend into heaven also saw the angels who (without choking anyone) promised that He will return the same way they saw Him go. They lived in an anticipation that it will happen any day now. It was a blessed hope that permeated their speech, their writing, their lifestyle. But we humans get easily distracted. We forget how long “soon” may seem for those who are not yet clothed with immortality. Days, weeks, years go by and it is hard to live in that same eager expectation. I remember as a kid being fully convinced that God would come back before I die. There wasn’t a question in my mind. Although I still firmly believe that He is coming soon, and every day is a day closer, the questions in my mind of just how soon “soon” is do seem to loom a little larger. But the promise is still true, He is coming again into this world. Until that day, it is our responsibility to reflect that true light that everyone in the world might see it. Because He is coming, let us be about making this world a better place.