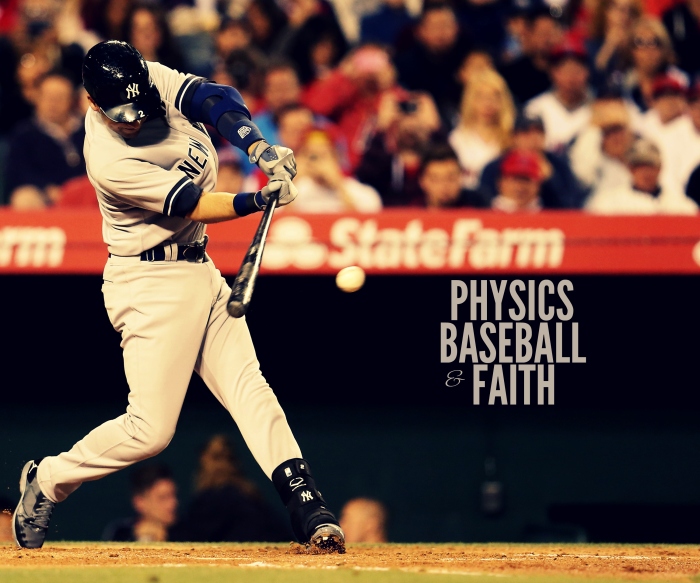 Gratitude for this picture goes out to Steven Dunn, the NY Post, and the greatest hitter of all time: Derek Jeter

Even Gentiles, who do not have God’s written law, show that they know his law when they instinctively obey it, even without having heard it. (Romans 2:14)

Relate: How do you hit a fastball going more than ninety miles per hour? You don’t. At least, that’s what the scientists say. I was listening to a sermon a while back where the preacher was using an illustration of how a physicist from Yale University wrote an article in USA Today (I believe) demonstrating why hitting a 90 MPH fastball is a physical impossibility. According to the preacher, this article stated that it takes about a seventh of a second (.15) for stimulus-response. That is also the length of time it takes for a bat to be swung into position once motion has started. It also takes an absolute bare minimum of a fifth of a second (.2) for the batter to identify the speed and type of pitch and calculate where it will be located as it crosses the plate. This in total adds up to half a second. The problem is, a fastball thrown at 90 MPH moves from point of release to the catcher’s glove in .4 seconds. Therefore it is a physical impossibility to hit a 90 MPH fastball. This theoretical impossibility flies in the face of the known certainty of the fact that fastballs are hit well frequently.

I am not familiar with the article in question but my guess is that the physicist who wrote it was Robert Adair who has authored The Physics of Baseball. I’m pretty sure it was an interview with him that I heard something along the lines of, “If an alien completely unfamiliar with the sport were simply looking at the numbers they would say that the art of hitting is an impossibility.” I wonder if the preacher was referring to a variation of this quote in his illustration. If so, there are three factors that were not mentioned which must be included before we can rule hitting a true impossibility (which it clearly is not):
1) The batter can stop motion within the first third of his swing. He has 1/20th of a second (.05) to stop swinging before he has reached a point of no return. This means the time difference moves from 0.5-0.4 down to 0.45-0.4
2) There are tells that the batter can look for. For example, if the count is 2-0, this pitcher is more likely to use his fastball than his curve or changeup. If the catcher sets up low and outside then it is likely to be his curve. The pitcher’s left shoulder has that twitch more often when… you get the picture. The batter is subconsciously processing all this and much more long before the ball is released and that .4 clock begins.
3) Every swing is ultimately a swing of faith. If the batter waited to swing until he knew with certainty where and how fast that ball was coming then, yes, that swing will always be late. But the batter must begin his swing on instinct before that information gathering is complete and then use the milliseconds available to him to make micro-adjustments as the motion is carried out.

React: I love this stuff but I’m guessing a lot of readers’ eyes have begun to glaze over as they read. Apologies. Let me sum it up with this. Every single swing of the bat is a cross between an educated guess and a leap of faith. This is true with virtually everything in life. The more talented and devoted an individual is to their craft, the better their guess will be but if they wait for complete knowledge and certainty then they will fail. Every single time they will be too late.

This is in effect what Paul is saying in Romans chapter 2. Yes, the Jews know more than the Gentiles but knowledge is not what saves or condemns. We are judged by what we do with that knowledge. How do we respond to what we are given? If we wait for certain knowledge it will be too late. By the time we are certain what we should have done, we will be hearing the Umpire say, “Strike Three. You’re outta here.”

Dear God,
Help me to trust You and then to act on that trust. Give me the discipline to study and learn all that I can about the truly important things in this game of life. Give me keener vision, a faster mind, and sharper instincts as I live it out. But ultimately give me the courage to get the bat off my shoulders and swing away when the timing is right. Ultimately, I understand that the outcome is in Your hands, but You cannot use what I do not attempt. Let me attempt great things for You, God. Help me to swing away.
Amen

The River Walk is a devotional created by Two Rivers Church. To visit or to watch a message online, please click here.
To read previous years devotionals taken from July 14th please click below:

The Carrot And The Stick

26 thoughts on “Physics, Baseball, and Faith”