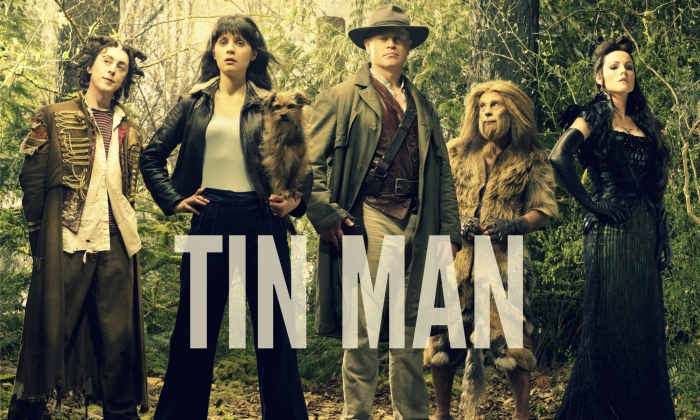 Guard your heart above all else, for it determines the course of your life. (Proverbs 4:23)

Relate: I know, this picture comes from a TV miniseries that reinterpreted the Wizard of Oz with a bit of a sci-fi twist. Honestly, I haven’t seen it and so can’t really comment much more on it than that. What I can comment on is the tin man in the story in the classic movie version of The Wizard of Oz. It is far more simple than what Frank Baum wrote in his book. The real “Tin Man” didn’t start out as a tin man. Before he became rusted to a standstill on the yellow brick road, the tin man was once a real woodsman (not a cop). He was in love with a beautiful maiden but the witch hated their love and so she cast one spell after another on this woodsman. Each time she did he lost a limb and it had to be replaced with an artificial appendage. Finally, a curse was spoken, the ax slipped, and it cut his heart in two. At this tragedy, he finally was fully refitted with tin and at first, he thought it was the greatest thing in the world. This tin woodsman was now a much harder worker, he was more efficient than ever and he needed far less rest than before. Leaving his fair maiden behind for longer and longer segments of time, the Tin Man became the most efficient and successful woodsman ever. Seeing that he still was not stopped, the witch sent a sudden rain where the woodsman was working. The tin man was caught unprepared and found himself stuck in place for a year with nothing to do but reflect. In this reflection, he realized then that losing his heart was the worst of all his misfortunes. By the time Dorothy, Toto, and the Scarecrow come by he had long since resolved to ask the wizard for a new one. (Isn’t it amazing what you miss out on when you watch a movie instead of reading a book?)

React: Like the tin woodman western society is absolutely full of men who think that hard work and productivity and efficiency are the greatest things in the world. Now don’t get me wrong, there is much to be said for a good old-fashioned strong work ethic. That said, how many have sacrificed something greater for that good? How often on his deathbed has a man said he wished he had spent more time at work? Have we been leaving our fair maidens by the roadside? Have we forgotten what, and who, we were working for in the first place? It is so easy, in the drudgery and monotony of daily living to lose the wonder of it all. That is why we so desperately need to guard our heart. For without it we are doomed to a life of passionless drudgery in this life and far worse in the life to come.