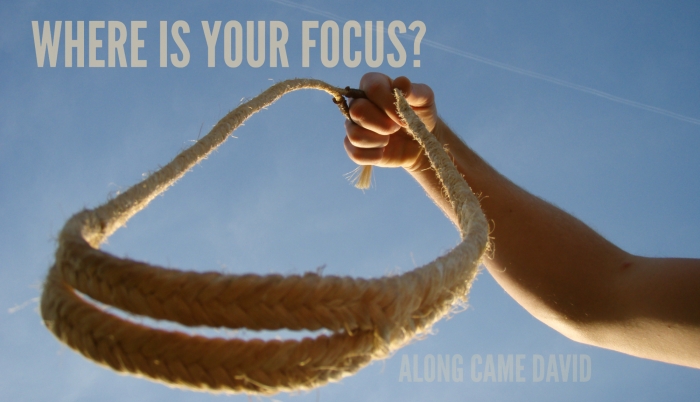 You come to me with sword, spear, and javelin, but I come to you in the name of the Lord of Heaven’s Armies—the God of the armies of Israel, whom you have defied.
1 Samuel 17:45

Relate: Israel and the Palestinians (er… I mean Philistinians… no that’s not right either. Philistines?) faced off in their respective armies every day. The problem is, the Philistine army had a champion who was fighting for their cause. That champion was named Goliath. His name means “global media” (or, more literally, “to uncover or to reveal”). Every day that champion would go strutting about mocking Israel and defying their God. The armies of Israel would run and hide from this champion and so they were never able to possess the land that God had given them. On to the scene comes a boy named David. David was not sent to the battlefield not to fight Goliath. No, he was sent to the front lines to be an encouragement to his brothers and their comrades, and to give them food and supplies sent from home. But when he arrived and saw this Goliath shouting out his follies, the Spirit of God stirred his soul and he could not leave the situation alone.

Why did it take an untrained boy who was unfamiliar with the situation and untrained in the methods of conventional warfare to destroy Goliath? Ultimately the answer is because David was God’s man for that hour but sometimes I wonder if God had been trying to stir up courage in others but they just could not see it. Until David’s time, nobody had killed any giants or done any similar feats but after David does his thing, Sibbecai, Elhanan, and Jonathan all kill giants and there were other heroes doing things like standing their ground alone and killing 300 Pales… er, Philistines in the field of beans, and jumping in a pit to kill a lion on a snowy day. Just a few days earlier, we talked about Jonathan (not the giant slayer) and his armor bearer climbing a cliff to route an army. So there is certainly no dearth of heroes or at least potential heroes, in the Israelite army. So why didn’t anyone else have the courage to stand against Goliath?

React: I am going to go out on a limb here and say it was because they were looking at the wrong things. Their focus was in the wrong place. What were they looking at? 1) Goliath, 2) each other, 3) Saul, and 4) their potential reward. The first and most obvious answer is that the people were focused on the problem. “Have you seen that giant?” They knew Goliath needed to be killed. Until he was, there could be no moving forward. There was no stepping into the land as long as Goliath was out there, but that guy is just too big. He is a problem that we simply cannot conquer by our own talents and abilities. What is my Goliath? What impossible task is standing in my way that I just cannot take down?

The second thing the people were looking at was each other. ” ‘Have you seen that giant?’ the men asked each other.”  God might be prompting my heart to get a little bit out of line and do something, but then I look at my neighbor. First of all, what will he think of me if I say I will go take down Goliath? Will he think I am being stupid or foolish? Will he call me insane? On the other hand, look at his muscles and look at mine. He has an inch on me in height, another one in reach, and another around the size of his biceps. The only place I have an inch on him is around the belly. He is definitely better suited to take on Goliath. I think I will push down the Spirit’s prompting and let my neighbor deal with it instead.

The third thing they were looking at was Saul. ” ‘Have you seen that giant?’ the men asked each other. ‘The king has…’ ” Since democracy is certainly the best form of government, the soldiers all took a vote and they put Saul forward to go kill Goliath. OK, not really. But hadn’t they chosen him to be king for reasons just like Goliath, didn’t they? Did they choose him? Or was he anointed by God and not the people? If that is the case, even better. He is then obviously God’s designated hero to fight Goliath. I’m not going to step out of the boat and risk life and limb to fight him. I will leave it to my pastor (or president). God has raised him up at this hour “for such a time as this”. Goliath is none of my business.

Finally, they were looking at the potential reward. ” ‘Have you seen that giant?’ the men asked each other. ‘The king has offered a huge reward to anyone who kills him’ ” The problem of killing Goliath has become one of economics. What is the reward for killing him, and is that reward equal to or greater than the risk involved? God is trying to call me forward, but I stamp that voice down while trying to factor in the cost. Now don’t get me wrong. I believe in prosperity. God has promised a rich reward both in this life and in the life to come for those who will follow him. The problem is, all too often we confuse prosperity with physical wealth. If we have faith will we never get sick and have a big fat bank account. Hogwash. I have had an incredibly rich life in following God. That life has been rich in experience, and love, and peace and joy, and… you get the idea. I have, however never had much money. I’ve even had the choice do I walk three miles and buy bread and water later, or do I pay for transportation now and not eat today. I have also gone months at a time where one minor ailment flows right into the next with virtually no time in between. So what? That isn’t what biblical prosperity is about and, besides, biblical prosperity is a side effect of following Jesus. It is not meant to be either the cause or the motivator. When it is, God in his grace will take it away that our priorities will be right.

Along comes David. He is focused entirely on something else. David is a man chasing after God’s own heart. It isn’t that David is unaware of these things everyone else is focused on. Yes, there is a problem, a Goliath that needs to be dealt with. He was sent there to be a blessing to the others so he is certainly aware of the other soldiers. There is probably no one else alive who respected the office and kingship of Saul more than David. How many times does he later say, “God forbid that I raise my hands against the Lord’s anointed” even though he has plenty of worldly justification and opportunity to take Saul out and take that kingdom for himself? David is also aware of the reward. He is talking to the others about this reward when he is brought before Saul. It is my opinion that he is trying to stir up courage in others, but that is just my opinion and we all know what opinions are like. (Everyone’s got one and they all stink). David sees all that, but it is all periphery. His focus is on the Lord. It is for the honor and glory of God’s name that he steps forward and takes down Goliath.

Dear God,
Have you been calling me out? I see a Goliath before me and it has stopped me in my tracks. I pray “let Your Kingdom come, let Your will be done” but this Goliath is standing in the way of Your Kingdom’s advance. Is it possibly Your will that I am the one to step forward to pick up the stones and face it down? Give me the courage to do so. Give me the wisdom to know how. Give me the strength to take it on. Three things I know for certain. This Goliath must fall. I can never take him on by my own strength. And You are Greater. So help me to step out in Your name, and for Your glory.
Amen