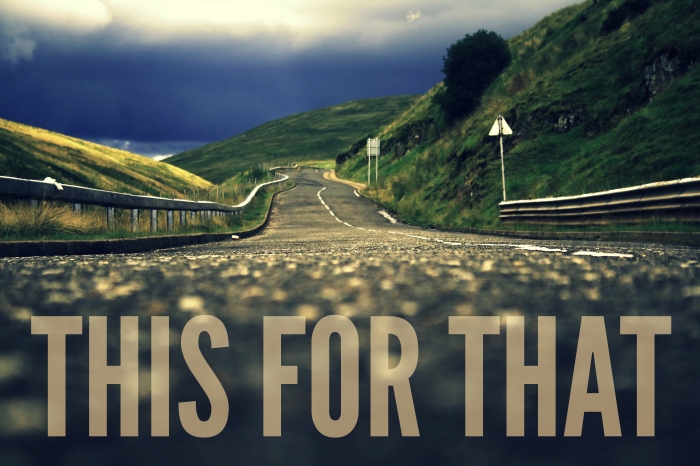 Then the Spirit of the Lord took possession of Gideon. He blew a ram’s horn as a call to arms, and the men of the clan of Abiezer came to him. He also sent messengers throughout Manasseh, Asher, Zebulun, and Naphtali, summoning their warriors, and all of them responded. (Judges 6:34-35)

Relate: “God, if _______ happens then I will do _______.” Fill in the blanks and you will have a very common prayer throughout my younger years. I had a “this for that” relationship with God. The problem is, even if the “this” actually did happen, I would immediately create another “this” so that I could get out of doing my “that”. Call it fear, call it doubt, call it insecurity… whatever it was, I didn’t really want to do what God was laying on my heart but I did need a good excuse not to. I thought I was being spiritual. I thought I was laying my fleece out there just as Gideon had done. All I really was doing was being disobedient to the nudging of the Holy Spirit in my life.

Over time I have made my fleeces a bit more sophisticated. I began to realize that I couldn’t get off the hook quite so easily, but I still had a tendency to try and make similar deals with God. “I believe _______ is what You want me to do. If You will provide for me through _______, I will step in that direction.” I was still trying to make a “this for that” deal with God. Usually now the “this” I requested was an impossible request but still a way for me to feel good about being “responsible” rather than being obedient in doing His “that”.

React: Sometimes I wonder how often God is on the other side saying, “I have this all lined up for you. You will have everything you need as soon as you step out in ‘that’ direction.” I found this true in my move to Turkey. When I first felt God calling me to go, I spent about three months trying to get everything lined up and in order. It was like trying to run through a brick wall. Nothing was happening. Finally, I simply stepped out and bought my airline ticket. I said to God, “OK. If this is really You, You have this many days to help me get it figured out. Otherwise this is going to be a very short trip.” Once I began to step out, it was amazing how quickly and smoothly things began to come together.

Gideon did lay a fleece out before God. It was an impossible one. It wasn’t enough. The very next day he laid out another fleece asking God to do the exact opposite, and equally impossible, thing as God had done the first time. There was one crucial difference between what Gideon did and what I used to do. Before laying out that fleece, Gideon had already stepped out in obedience. He had already called for the army and sounded the trumpets of war. He had laid out his fleece asking God to confirm that the steps he had already taken were the right ones.

All too often we want to know what all the steps are going to be before we ever begin to march. I want to have the map all plotted out before I ever hop in the car. This is the “responsible” way to act. It is the “right” way to move and prepare. It also takes faith completely out of the equation. Are we willing to step out in faith or will we continue to use our “this for that” twisted version of Gideon’s fleece as an excuse for our disobedience?

Dear God,
When You call me, help me to step out. If I am not sure exactly how or when or where I am to be stepping, so please correct my course as I do my best to obey. I know You will provide what is needed. I know You will provide the victory if only I will get off the sidelines and get into the action. Do not let fear keep me from moving. Do not let uncertainty keep me from moving. Let me sound the call to action and as I move out for You please confirm to me that You are still moving with me.