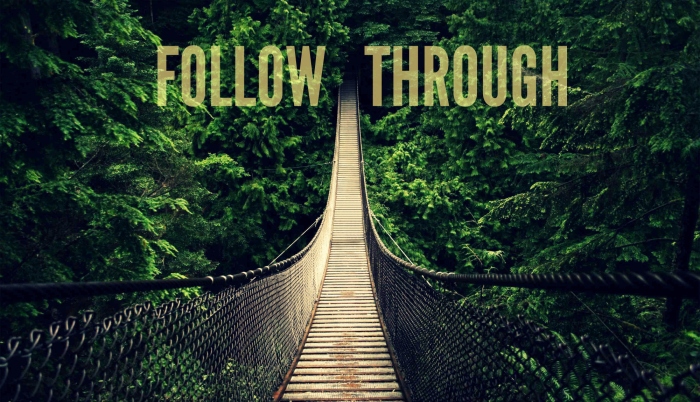 Relate: How good is your follow through? In 1978, Warren Willingham headed up what was called the Personal Qualities Project. This test was created by Educational Testing Service. The ETS is the group who created the SAT, TOEFL, GRE, and many other big important tests you have probably heard of and taken. In this Personal Qualities Project, they wanted to see what personal attributes were the biggest indicators of success. Over a hundred different qualities and variables were examined. This was by far the biggest study of this kind up to that time and nothing else in the past 40 years even comes close. Of all the things looked at, the biggest indicator of success by a long shot was what Willingham called Follow Through. Honestly, nothing else even came close. It was the biggest indicator for graduating college, for academic excellence in college, and for holding leadership positions shortly after graduation.

So what is follow through? According to Willingham, it involves three things. 1) Committing to some sort of extra-curricular activity and staying with it. 2) Signing up again the following year for the same activity. 3) Showing some progress or accomplishment in the activity. Willingham says it doesn’t matter what the activity is. It only matters that they stick to something and the put enough effort in to demonstrate tangible improvement. Harvard agrees. After conducting some tests of their own, they have changed the way they look at potential students. Bill Fitzsimmons was at one point the dean of admissions at Harvard. He said that as important as academic excellence is, it is just as important that potential students “have made a commitment to pursue something they love, believe in, and value and do so with singular energy, discipline, and plain hard work.” In other words, they do something passionately, and then they follow through with it.

React: So how good is your follow through? How good is mine? For the longest time, I viewed myself as a starter? I was an ideas man. I felt like my calling in life was to come up with a great thing, get it off the ground, and then hand it off to someone else who can “follow through”. According to some really smart people like Warren Willingham, Bill Fitzsimmons, and King Solomon, I was wasting my life. As the wisest man in human history said, “Finishing is better than starting. Patience is better than pride.” I am not there yet, but I would like to think this is one area where I have drastically improved over the past decade or so. These days there are three questions I have to help me concentrate more on what matters most:

That last question, it is another way for me to ask myself, “How good is your follow through?”