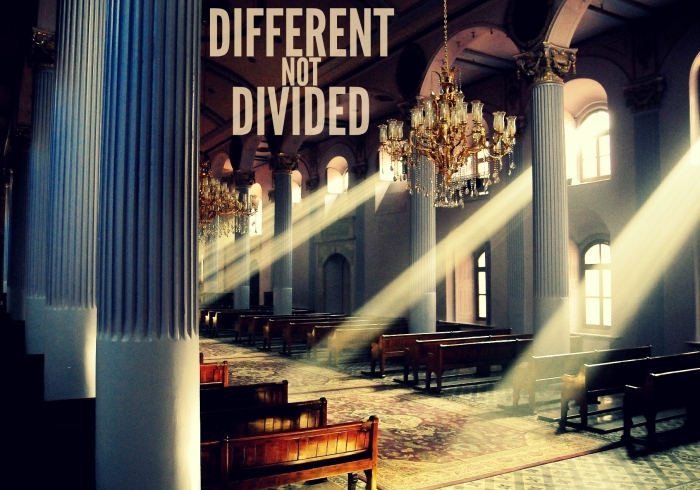 I appeal to you, dear brothers and sisters, by the authority of our Lord Jesus Christ, to live in harmony with each other. Let there be no divisions in the church. Rather, be of one mind, united in thought and purpose. (1 Corinthians 1:10)

Relate: “Are you catholic or are you protestant?” After answering this question, his follow up was, “What type of protestant are you?” There were plenty of answers I could have given. I could have said “I am pentecostal.” This would be true. I could also have said, “I am Assemblies of God” since this was how I was raised and I still lean much further in that direction than away from it. I could have said, “I am interdenominational”. While working college ministry I was part of an organization that linked many different Christian groups from many different backgrounds both theologically and culturally. I could even have answered that I am orthodox quaker since a recent online quiz “what religion are you” tried to put me into that box. I was pulled along with the early emergent church movement and I spent years labeling myself as a red letter Christian back when I was devouring everything Tony Campolo wrote and said. Instead, trying to roll everything above into one simple statement, I said, “I don’t really fit into any labels.”

Ay de mi. Some people just have to have a label for everything. Instead of trying to bust out, I just shrugged and changed the conversation. Some battles are just not important enough to fight. This man is my brother and walking in love and unity of purpose is more important than the boxes some spend so much time creating and others breaking down.

React: In the Corinthian church, some labeled themselves as Pauline. Others of Apollos or Peter (Cephas). These were the people who needed or prided themselves in what we would call today, “denominational labels”. There were others who felt themselves above that. They would go around in their smug superiority saying, “I am a follower of Christ.” In the same way, there are those today who think they have matured beyond old fashioned denominations.

There is nothing wrong with being Baptist, of Methodist, or Catholic, or Russian Orthodox, or Amish, or “nondenominational”. These are not divisions. They are organization. They are structure. Structure is good. Organization is good. No organism, including the body of Christ, can live and grow without organization at some level. These denominations only become divisions when we choose not to fellowship or cooperate with anyone from a different label or lack thereof. If I choose to fellowship with my sister because she is presbyterian and I am episcopalian then it is division. If I refuse to help with an outreach that other group is doing for the community because I heard they play Jesus Culture music and that youtube guy said that Jesus Culture is just… wretched, then I am in sin.

Peter and Paul, Apollos and James all had different personalities and emphasis in their ministries. Naturally there would be some who would gravitate more towards one or the other. This is fine. I love Gregorian chant and hate bluegrass. I tend to dress casually, even if I am behind the pulpit, and tend to lean stronger on God’s sovereignty than on man’s free will. That all means I might fit better in some churches than in others. That doesn’t mean I am any better or worse than others who fit in different areas. It doesn’t mean I cannot be of one mind or purpose with others of different theological and cultural preferences. As long as we are all under the authority of Christ and following where Jesus might lead, we can be of one mind united in thought and purpose. Denominations are not divisions.

God, help me to walk in love and unity with my brothers. Help me not to look down on others simply because they might have a different theological emphasis or cultural tradition. Help me to hold fast to the truth You have revealed while recognizing that until I get to heaven, there might be and certainly are things on which I am wrong. Let everything I do be marked by a love for You and a love for others. Let me be one in unity and purpose with all who are following after You.

15 thoughts on “August 4 – Different Not Divided”