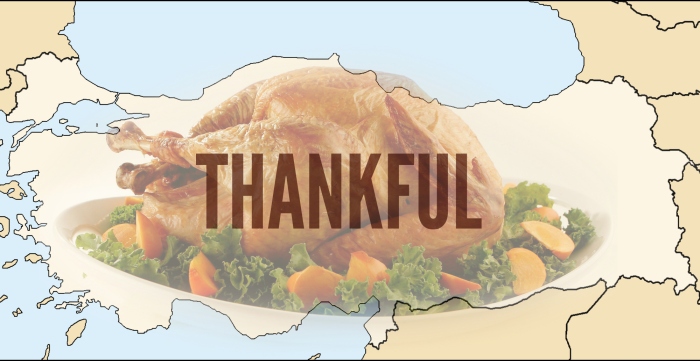 Give me an eagerness for your laws rather than a love for money!  Turn my eyes from worthless things, and give me life through your word. (Psalm 119:36-37)

Relate: This morning I was reflecting back on what things were like for me a year back. It was right around this point, just after Thanksgiving, that I started my eight day fast. I wasn’t fasting because I was being spiritual. I was fasting because I had no more money. My bus card was down to zero, my bank card was at zero, and I had no cash on hand until I was paid in the beginning of December.

You see, I was always planning on moving from Istanbul to Gaziantep to serve God by serving the refugees and the church here. The plan had been for me to live in Istanbul learning the language, culture, and the way things work here in Turkey for two years and then move down to the Southeast where, God willing, I would invest the rest of my life. I was going to work through the 16-17 school year and then in June I was going to head down. That was the plan. Things don’t always go the way we plan it when we are following God’s will. Discipleship is dangerous.

Shortly after the last school year began, I got a call from the pastor living here. He had crossed into Jordan for a week to help with the refugee ministry there. When he tried to re-enter Turkey, he was stopped at the airport and told he is never allowed back in Turkey. They put him back on a plane headed in the other direction and sent him back to Jordan. So now the church here in Antep was suddenly without their pastor. He knew I was planning on coming nine months later but was there any way I could speed up those plans? As quickly as I could wrap up things in Istanbul I was on my way down.

There was a school here in Antep that had hired me but their HR department in Ankara decided that they weren’t going to take on any Americans in Southeast Turkey. If I wanted to work for them I should work in the school in Ankara, or maybe Istanbul. Pretty much everywhere I checked told me the same. We like your resume and would gladly hire you for Ankara, or Antalya, or Izmir, or… So now here I was in a new city with no income, still responsible for rent at my apartment in Istanbul until the end of the year as well as a new place here, and my savings was already depleted because of summer vacations and volunteer opportunities. The money I had made it through about two and a half months. The new weekend part time job I did land didn’t start paying until December. So from late November until then, I fasted. Real slow.

React: Today is Thanksgiving. I know this because I am seeing all kinds of advertisements for black Friday. I even got a popup first thing this morning: “Black Friday starts today.” Ummmm… I am so grateful for the privilege and honor of being able to serve where I do. There have been multiple times over this past year when I honestly thought I would not be able to remain here for financial (as above) or political reasons. Every day I can stay is a blessing. I am so blessed for the community of God that continues to serve and shine their light in a city where millions are hostile to the truth. I am glad that God has continued to prove Himself faithful even when He isn’t working on a timetable that would be comfortable or safe for me. I am blessed to have had a part in the many who have come to know Him here despite the huge sacrifices it takes for a Muslim to turn to Christ. I am grateful that the government here has not yet made serious efforts to shut us down. I could go on and on about the many, many things I am thankful for and none of them are actually “things”. I also think it is no coincidence that the enemy continues to try and shout down this holiday with advertisements and promotions for greed and getting. After all, it is with Thanksgiving and praise that we enter God’s presence.

So lets enter in. What are you Thankful for?

Dear God,
Thank You for proving Yourself faithful over this past year. Through opposition financial, social, and political You have held me safe. Though never early You have always been right on time. You have promised that nothing would stand against me and nothing in my way has been able to stand. Thank You for my life, my home, my community, my friends. Most of all, thank You for the cross.
Amen