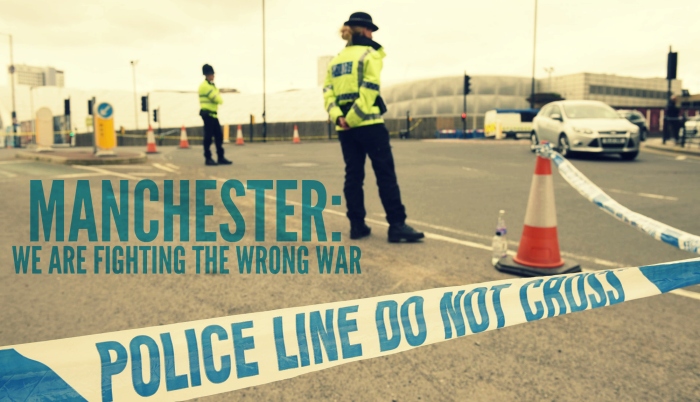 One day Recab and Baanah, the sons of Rimmon from Beeroth, went to Ishbosheth’s house around noon as he was taking his midday rest. The doorkeeper, who had been sifting wheat, became drowsy and fell asleep. So Recab and Baanah slipped past her. They went into the house and found Ishbosheth sleeping on his bed. They struck and killed him and cut off his head. (2 Samuel 4:5-7)

Relate: I first heard of Ariana Grande a couple years ago when I saw her singing some Christmas song on youtube. While I love her voice and think it was an excellent rendition, I can’t really say I have become a fan. If you asked, I couldn’t name any songs she sings. No, I am not the right demographic for that. I’m a guy a few decades too old to be considered more than a casual admirer of her beautiful voice.

That is what makes what happened in Manchester so especially horrible. The evil perpetuated by a radicalized Manchester native specifically targeted a crowd that would be full of teen and preteen girls just coming out of what was probably a fairly innocent concert. From the little I know Grande is no Lady Gaga, Miley Cyrus, or Nicki Minaj. Salman Abedi was born and raised in Manchester. He wasn’t a refugee or an immigrant (although his parents were) so he most likely knew exactly who he was hitting. The sad thing is, in some warped twisted way, he most likely thought he was being a hero.

React: Recab and Baanah also thought they were being heroes. They slid past a sleeping guard and took the head from a sleeping king. They then escaped to the other side and delivered this head to an enemy king. In some warped, twisted way they thought they were being heroes. They actually believed they were fighting against evil and would be rewarded. The same lie is perpetuated in holy books, mosques, on the internet, and from politicians, news outlets, and drill sergeants in boot camps today. Although thousands of years have passed since David’s time we still seem to fall for the same fallacy that swords and guns and bombs can solve the problems we seem to have with our enemies. Most of the time we don’t even realize who our enemies are. Our enemy isn’t a specific people group or culture. They aren’t individuals from any specific geographical location. Again, Salman Abedi had been born and raised right there in Manchester.

Our enemy isn’t a people but rather an idea. We wrestle not against flesh and blood. We wage war but not against other humans. No. We fight against ideas and ways of thinking that set themselves against Christ. (2 Corinthians 10:3-5) The kind of war we are in will not be won by guns and bombs. It cannot be won through laws and bans. As long as we fight with weapons like these, more Manchesters are bound to happen. The way we win this war is through love and truth and kindness and generosity. Killing off one potential Salman Abedi will only raise up three others somewhere else. Keeping him out of our communities will only create others like him from already within. No, the way to stop more men like him is to love them into the kingdom before they have a chance to become radicalized.

Dear God,
In the face of such a horrible tragedy as we have just experienced, it can be so hard to love. It is so much easier to look at the evil committed by one and come to hate others that speak and believe as he did. But if we do that, then we are losing the war. Help me to love my enemies. Help me to remember that it is Your kindness that leads to repentance, and help me to be a channel through which You can manifest that kindness. Help me to have a deep love for others even as I more and more despise the way of thinking that has enslaved them. Help me to wage this war with love.
Amen

42 thoughts on “May 24 – Manchester: We Are Fighting The Wrong War”