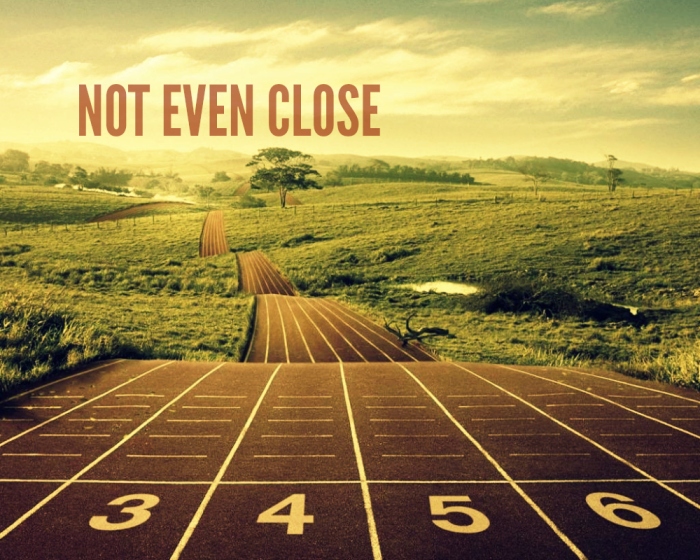 So while these new residents worshiped the Lord, they also worshiped their idols. And to this day their descendants do the same. (2 Kings 17:41)

As Paul spoke on and on, a young man named Eutychus, sitting on the windowsill, became very drowsy. Finally, he fell sound asleep and dropped three stories to his death below. (Acts 20:9)

Relate: The Kentucky Derby has been called by some the most exciting two minutes in sports. My guess is that this claim is usually made by gambling men and it isn’t the race itself that excites them so much as what has become of their money. The thing is, in most races if it wasn’t for the announcers giving the play by play, it would be difficult to know just exactly who won. Those horses are usually so close together that the winning time is measured by fractions of a second. That is not the case in this most famous of races:

After the northern tribes had been exiled, new groups of people were brought in to settle Israel. When they learned that YHWH was the God of the land, they began to worship Him. The problem is, they continued to worship their other gods as well. They might even have put YHWH first, but it was a close run thing. They were riding the fence, and that dual worship killed them.

Eutychus sat in the window. While Paul was preaching, he was listening with one ear. The other was attuned to what was going on in the world outside the church. This was a teenager riding the fence. His attention was divided and that dual focus killed him.

React: Back in my high school days I ran in cross country and track. I was pretty good and for a while I held the junior high school record for the mile. I remember my mind drifting in my devotions one morning back to a race I had won the day before. It had been one of my best times and also an incredibly tough race. There were three of us who almost crossed that finish line together and I couldn’t have been even a half step in the lead when that line was crossed. As I was thinking of this the next morning, I felt the Lord saying to me, “Don’t ever let your worship of me be like that race.”

God didn’t just want to be barely first in my life. He wanted to lap the field. We can’t just sit there riding the fence and think that because we are leaning slightly in God’s direction we are doing OK. There should be no sounds of footsteps as we run this race. He wants our pursuit of Him to be like Secretariat’s. It is time to throw away those other idols and worship God alone. It is time to get out of the windowsill and focus solely on Him. There can be no fence riders in the Kingdom of God.

God, You are God alone. Be the only God in my life. Those other things that might compete for my time and money, push them so far distant that there can be no question of who and what I worship. Those other things that might fight for my focus, take them right out of the picture. I want to worship only You. I want to follow only You. Let anyone who would see my life or hear my conversation know immediately and instantly exactly what my life is about. It all belongs to You.