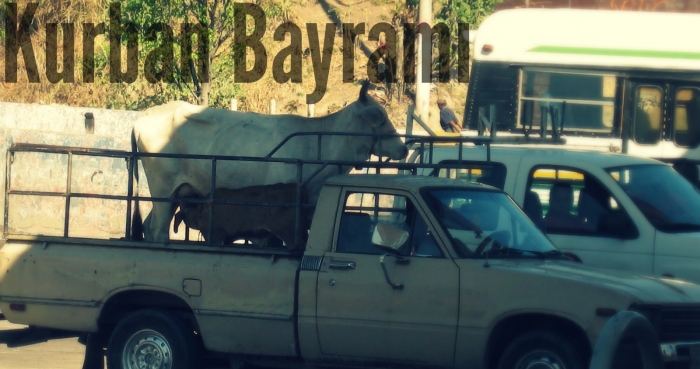 For Christ himself has brought peace to us. He united Jews and Gentiles into one people when, in his own body on the cross, he broke down the wall of hostility that separated us. He did this by ending the system of law with its commandments and regulations. (Ephesians 2:14-15)

Relate: Just a short time ago I saw something I didn’t think I would ever see inside a city of over fourteen million people. I was just walking down my street when I saw a truck parked just outside a large, building whose ground floor looks to be a warehouse. On the back of this truck was a cow. There were two men pulling on a rope halter trying to get that cow down from the truck into that empty dark room. On the truck with that cow, another man was pushing on it’s rump with everything he had. It sure looked to me that those three men were fighting a losing battle. That cow was not being very agreeable.

As I walked by and tried my hardest not to laugh, inside I was thinking, “Don’t give in, cow. Nothing good will happen in that room.” I was half tempted to stop and take a picture, but then I would have to have done the neighborly thing and help them with their struggle. Beyond the fact that I am allergic to cows, (not their meat) I don’t really know what I think about helping a Muslim family out with celebrating Kurban Bayramı.

In English, that translates roughly as the Feast of Sacrifice. To my Syrian friends, it would instead have its Arabic name: Eid al-Adha. By whatever name it is called, the Feast of Sacrifice is one of the biggest holidays in the Muslim calendar. Worldwide, over one hundred million animals will be sacrificed over the next couple days to commemorate God giving Abraham a ram to sacrifice. Abraham had been tested by God and had shown that he was willing to submit to God’s commands even to the point of sacrificing his own son. Most Muslims claim the son Abraham was about to sacrifice was Ishmael even though the Quran names the son as Isaac. (Sura 37:100-112)

React: Jews, Christians, and Muslims all agree to the basic facts of this event in history. Abraham was willing to offer his son as a sacrifice. God provided a lamb instead. Where the disagreement comes into play is on the importance of the sacrifice. For the Jew, the sacrifice of an animal covers our sin and makes us right with God. For the Muslim, Abraham’s obedience proved that he was righteous and at peace with God. For the Christian, it is the substitution that makes us right with God.

An animal is not enough. As it is written: “If [animal sacrifices] could have provided perfect cleansing, the sacrifices would have stopped, for the worshipers would have been purified once for all time, and their feelings of guilt would have disappeared. But instead, those sacrifices actually reminded them of their sins year after year.”

Obedience is also not enough. The thing is, when we try to do right, we fall far short. Paul says about our efforts: “Refusing to accept God’s way, they cling to their own way of getting right with God.” The prophet Isaiah puts it even more bluntly: “We are all infected and impure with sin. When we display our righteous deeds, they are nothing but filthy rags. Like autumn leaves, we wither and fall, and our sins sweep us away like the wind.”

Christ alone is enough. As has been written: “But God is so rich in mercy, and he loved us so much, that even though we were dead because of our sins, he gave us life when he raised Christ from the dead. It is only by God’s grace that you have been saved! …God saved you by his grace when you believed. And you can’t take credit for this; it is a gift from God. Salvation is not a reward for the good things we have done, so none of us can boast about it.” And as has been said above: “For Christ himself has brought peace to us.”

God, no other sacrifice is enough. Nothing I can give up or kill will ever make atonement for what I have done. All it can do is remind me how far I have wandered from Your ways. No amount of submission, good deeds or righteous works will ever be enough. Even my best efforts will far so far short of Your standard of perfection. You alone are enough. Your sacrifice on my behalf, although I could never deserve it, has brought me peace with God. Thank You, Jesus, for the cross. So as the world around me celebrates the feast of sacrifice, so I too celebrate the sacrifice that was made on my behalf.